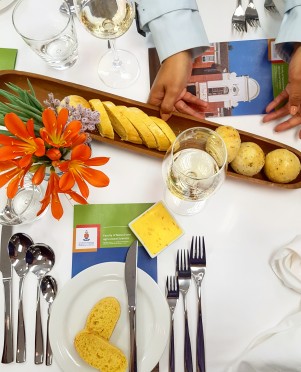 #JFWEats, Food, The Long Of It Food
No Comments

Culinary Science Takes a Leap Into the Future at Tukkies

Not all invitations are created equal and I almost always have to decline when events are on weekdays, during office hours, because of my day job. However, when I received an invitation from the University of Pretoria, I put in some leave without a moment’s hesitation. Not only would I be privileged to attend the relaunch of their food science laboratory, and the launch of their newest degree (the BSc Culinary Science degree) but the lunch and demonstration would be by the one and only Chef Chantel Dartnall from Mosaic. In other words, unmissable! 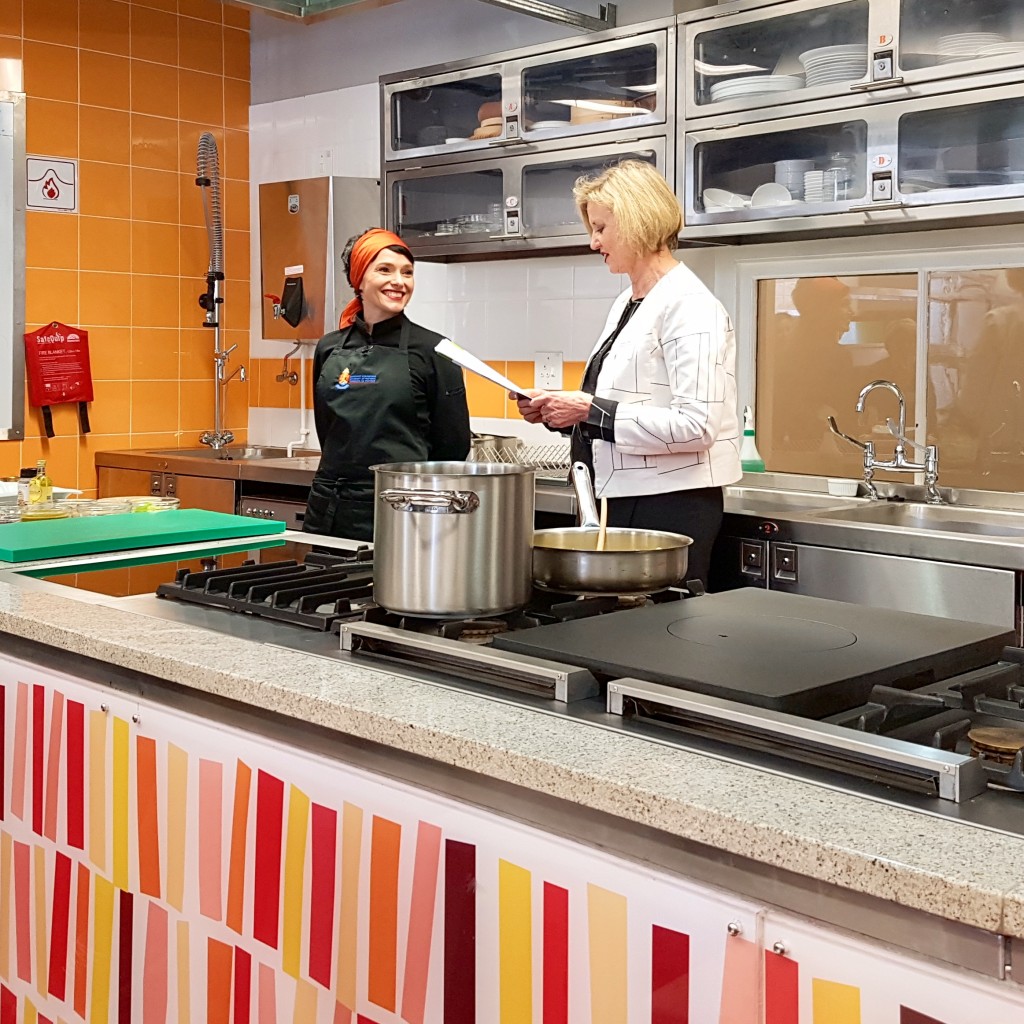 The University of Pretoria’s (UP) Consumer Science Department unveiled newly renovated food laboratories which will accommodate more students with better equipment. Previously, the labs had 26 stations in total, but this has now been expanded to 60. Gas stoves have been fitted in keeping with current commercial trends. The new labs can also offer induction cooking and blast freezing as well as a range of food science equipment for modern day research and training. The labs have been designed to be trendy, ergonomic and user friendly, with industrial equipment and surfaces. The BSc Culinary Science degree offered by UP is the only degree of its kind in southern Africa.

“Culinary research is a growing area which can be expanded with new facilities and modern up-to-date equipment. This puts UP at the forefront of culinary art and science training and enables future graduates to contribute to consumer food product and services development,” says Dr Gerrie du Rand, head of the Food and Nutrition section at the department. 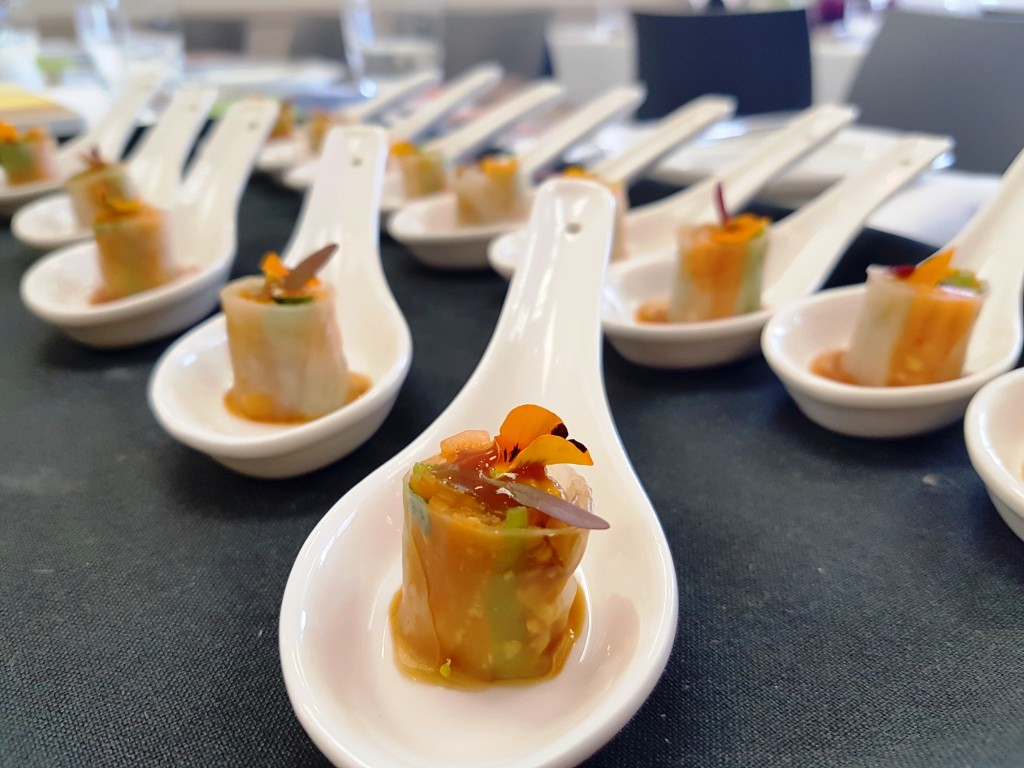 And as we descended upon these upgraded premises with great excitement, it was already apparent that amazing things as well as skilled professionals would soon be emerging from Tukkies. Even more so than usual. We were given a tour of the new premises. Notably, a lot of the incredible kitchen upgrades and equipment were supplied by Culinary Equipment Company. If you’ve ever been to the Culinary showroom in Lanseria, you’ll know all about their staggering and impressive range of kitchen equipment and supplies! 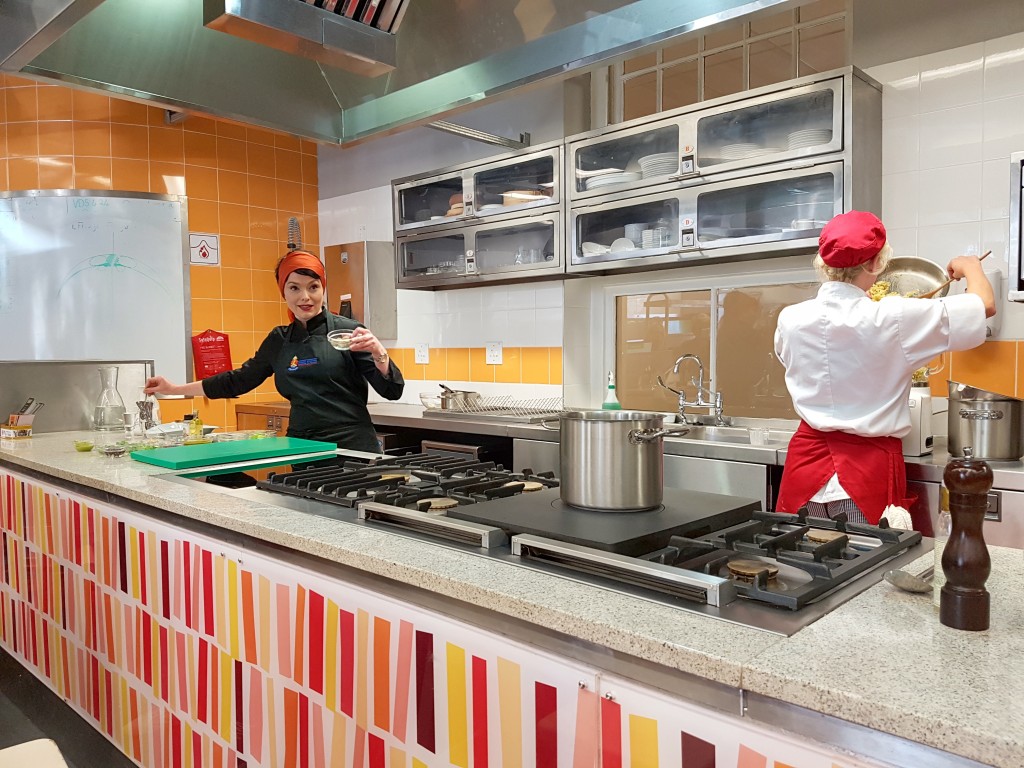 In the final kitchen space, we found Chef Chantell already setting up to do a small demonstration, a peek of what was in store for lunch. As she chatted amicably to the crowd and explained what her demo was about, a young and somewhat stunned student stood by to assist. Imagine being 18 or 19 and getting to be sous-chef to the great Chef Chantell Dartnall! She was in process of creating a sample of our Soup du Jour, a humble soup of the day, but as Chantell added, made of noble ingredients! For me, it was a special privilege to watch the chef in action and glimpse some behind-the-scenes moments. 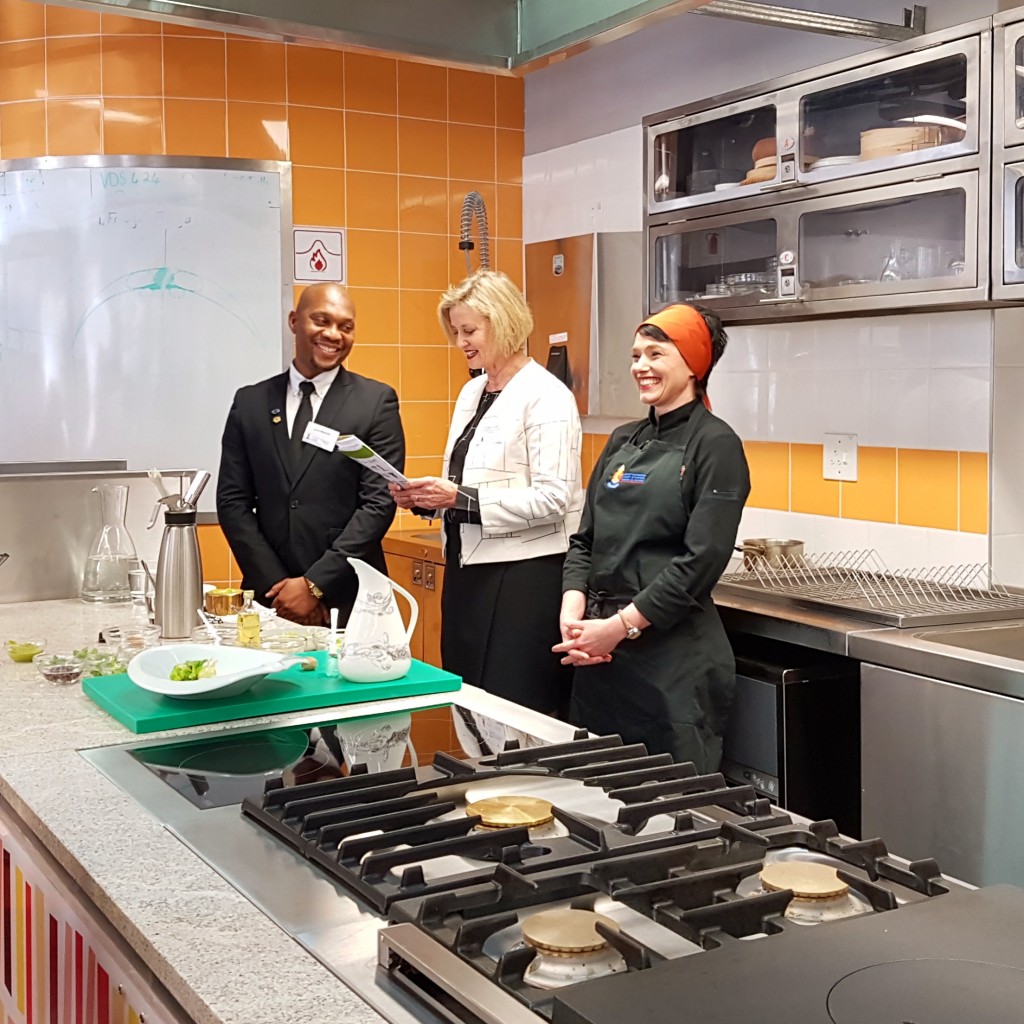 Afterward, we made our way through to the makeshift dining space for lunch and were wined and dined in style. Chef Chantell had even brought her Sommelier, Moses Magwaza, who would talk us through all the wines on offer. As we sat down, the UP students were already bringing out the freshly baked bread, as well as a quartet of butters: salted butter; Saffron & Calendula; Rosemary & Vanilla; Cinnamon & Honey. Impossible to pick a favourite butter but I tried hard not to eat too much of the warm, fresh bread. And to start on the wines, we were served an incredible Chenin Blanc from Dorrance. As Moses explained, the winemaker, Christophe Durand, doesn’t have a farm. He has a big cellar in the middle of Cape Town, where he produces his wines. This Chenin Blanc is made of Swartland region grapes. Moses, the expert, brought our attention to the lovely acidity, the lemon, lime, and apricot aromas, and orange blossom tones. 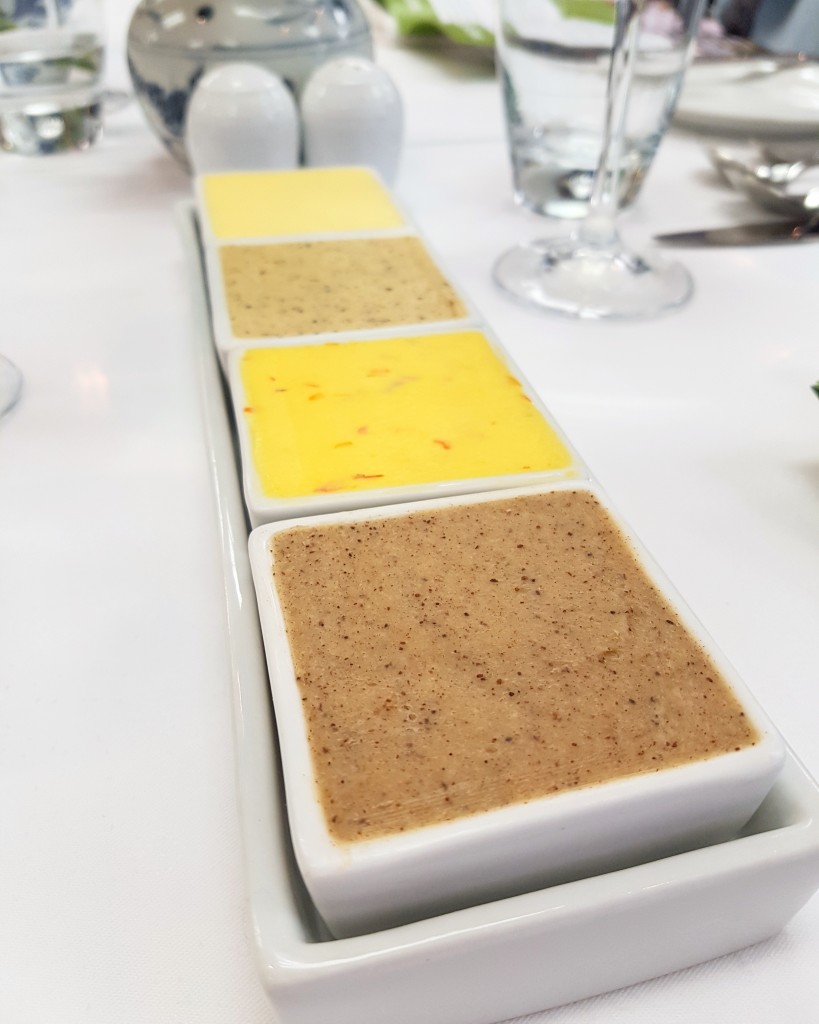 While we were sipping on our Chenin and enjoying the bread and butters on offer, Dr Gerrie du Rand told us a little more about the story behind the refurbishments of the Consumer Science food labs, which have been in the works since 2010! It took quite some doing but they finally got the go-ahead from UP in 2015 and after a lot of work and effort, the refurbished labs were completed in March this year.

“In our experimental kitchen, we have very special and sophisticated equipment and that enables us to do research, as the university is a research-orientated university and that is one of the prime goals they want to achieve. We also have to make sure our kitchens will be income generating, so we will in the future be able to offer courses and involve the industry and the public so we can make them economically viable as well.”

Next up was our Amuse Bouche, called Sunflower Spring. Made up of  carrot, carrot jelly and puree, and an orange blossom yoghurt cream, it was a tiny and delicately arranged dish. The orange blossom flavour was incredible, and is a new personal favourite of mine! 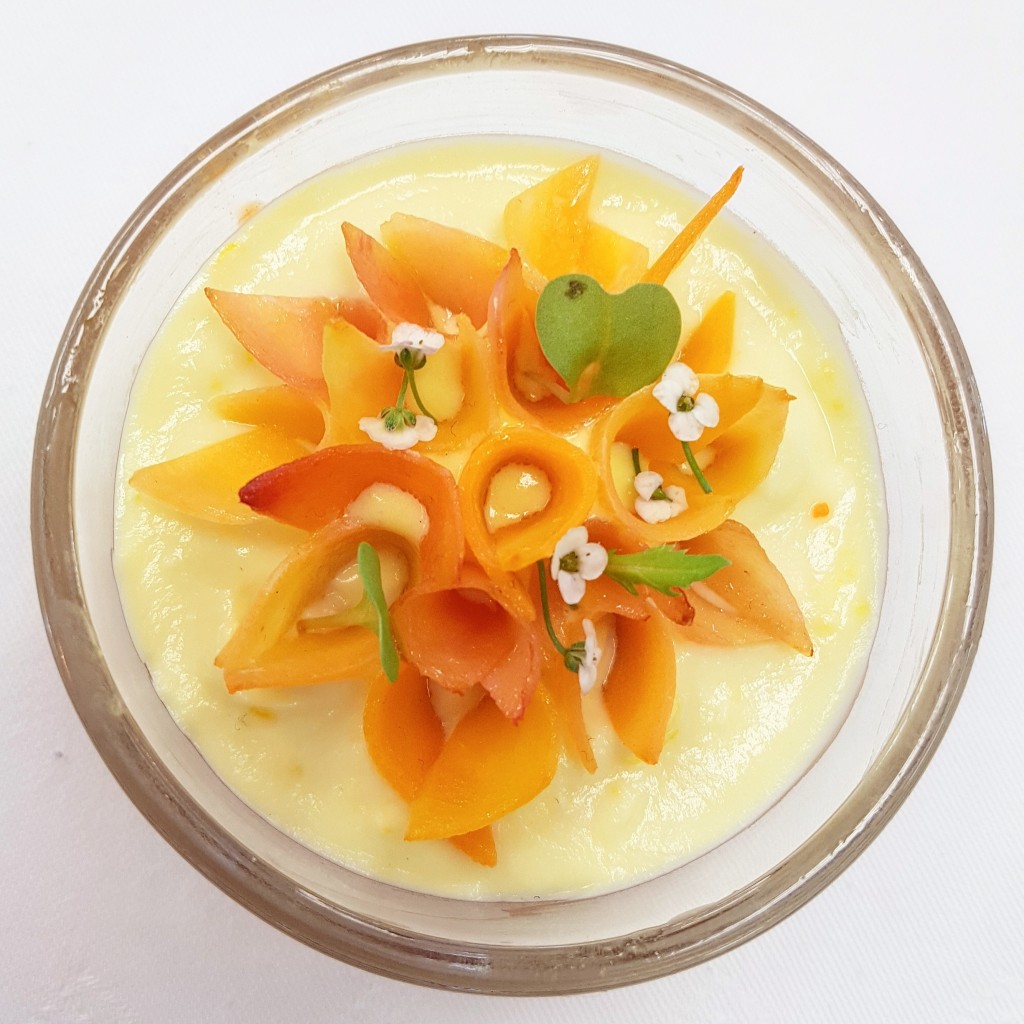 Forging ahead, we went on to the starter, the Soup du Jour, which was also what Chef Chantel had created during her demonstration. The soft creaminess of the light and fluffy cauliflower cream soup is permeated with the amazing earthy flavour of truffle oil. This soup surrounds the brussel sprouts, filled with rich liver mousse and black Perigord truffles. You’ll never look at brussel sprouts the same way again! This dish is another magnificent achievement from the Mosaic kitchen. Accompanying the dish, the Collaboration Cinsaut, a wine created by Louis Nel in collaboration with Bertus Basson. Unwooded and very light, there are notable influences of cherries and strawberries, and thanks to the discreet tannins, it pairs well with the creaminess of the cauliflower. 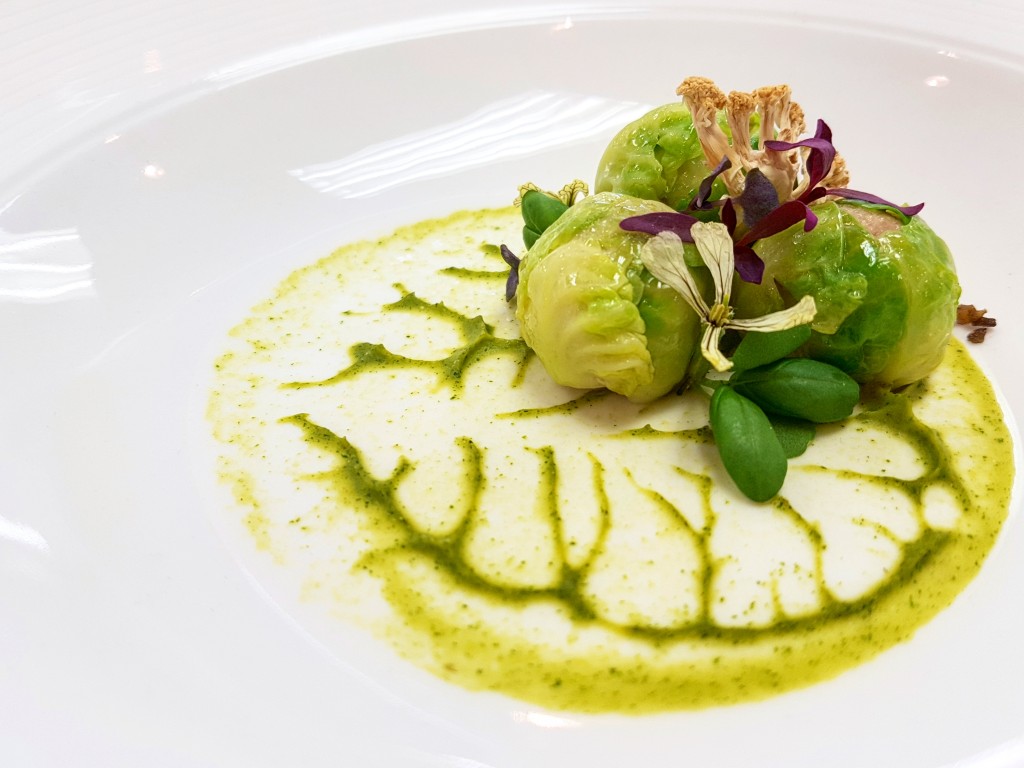 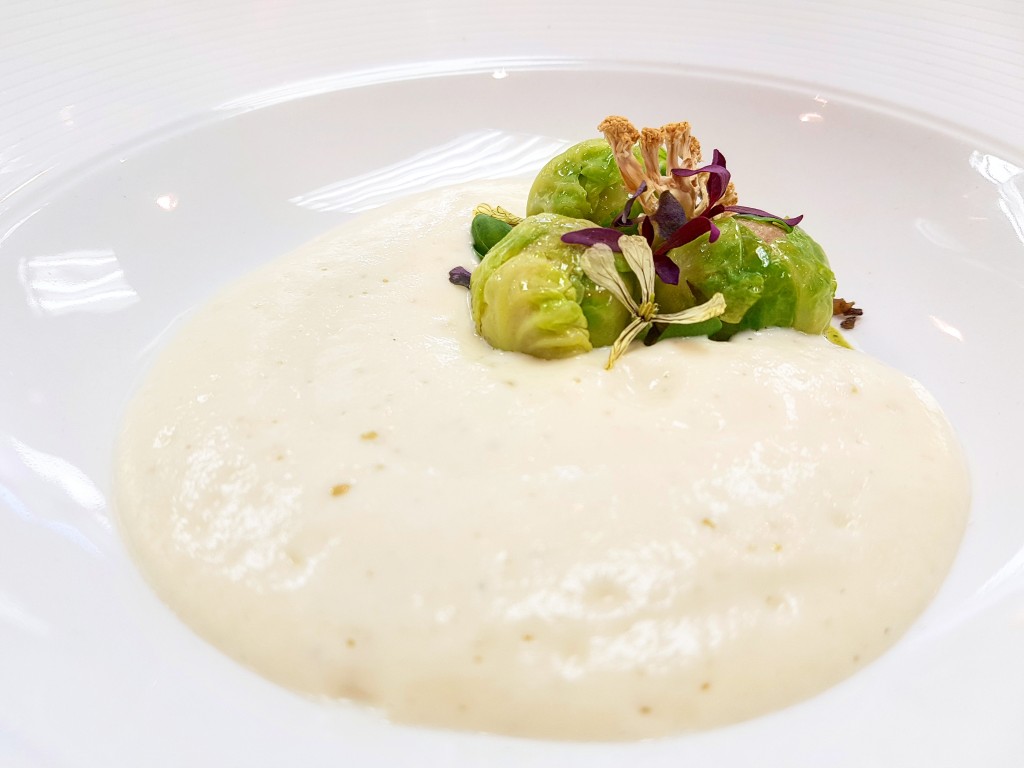 “It’s a merging of culinary art and science.” Said of the BSc degree at UP but true of both the degree and the food created by Chef Chantel. 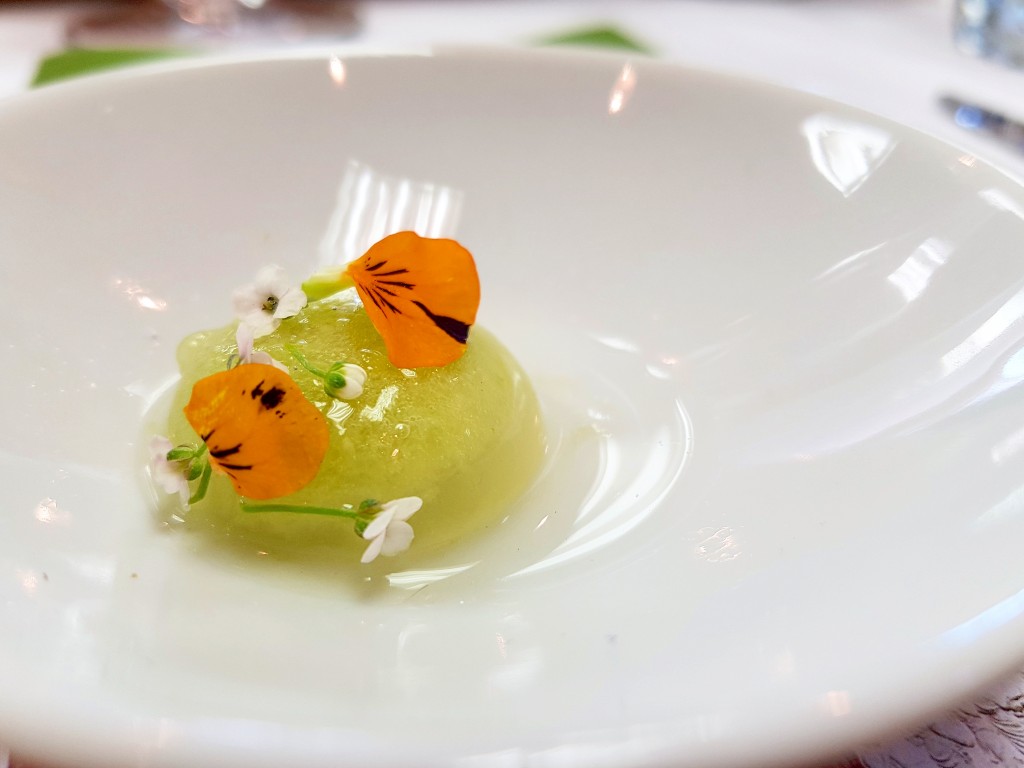 For mains, we were served Red Hartebeest, one serving of which was delicately smoked with Soetdoring, and the other braised. This was served with the incredibly delicious Chopin potatoes (ask me more about WesGrow speciality potatoes!!) and baby turnips. This wonderful meaty dish was paired with the Windmeul Reserve Cape Blend. A blend of Pinotage, Cabernet Sauvignon, Merlot and Petit Verdot. Lots of cherries on the nose, heaps of berries on the palate, and hints of pencil shavings and cigar box. The grapes are ripened more, and as a result the tannins aren’t overly harsh. 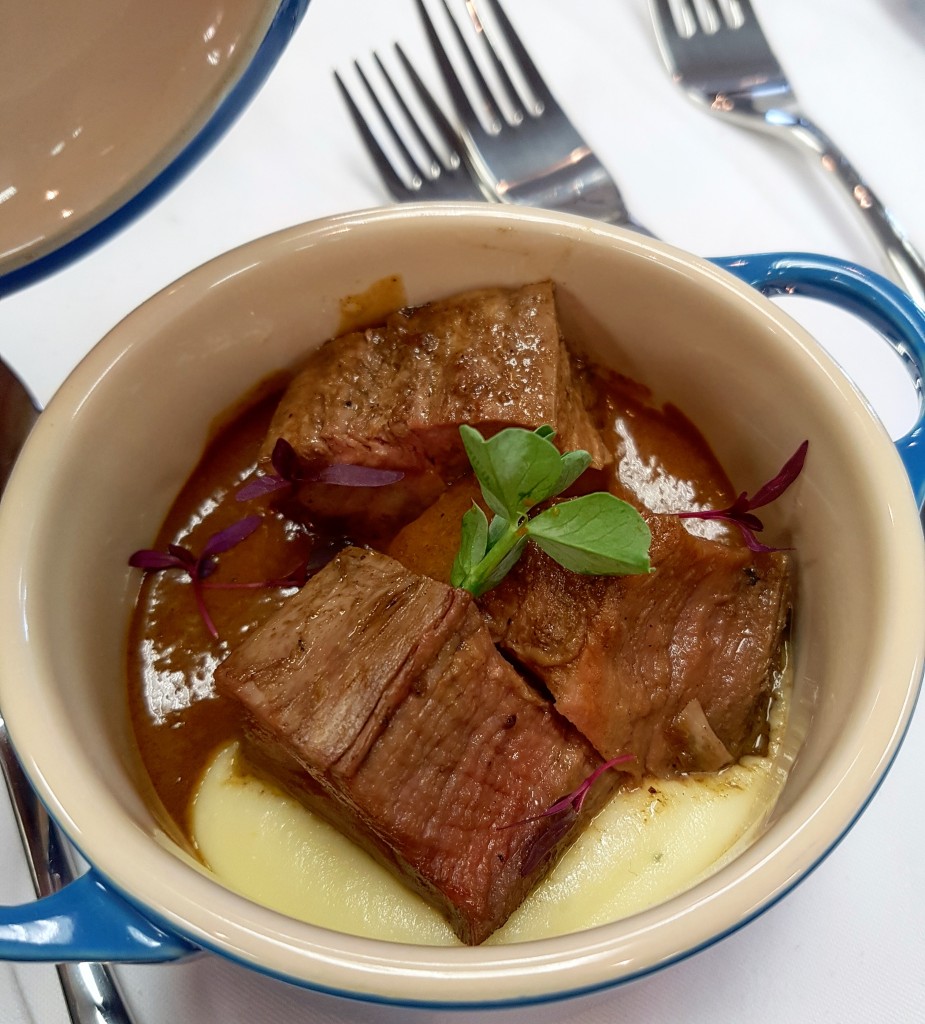 Very sadly, I was unable to stay for dessert. I would be missing out on the by now very famous First Frost, a Forelle pear with Callebaut chocolate and Tonka bean. Nevertheless, though I couldn’t stay for the entire event, I am excited to see how the UP Culinary Science degree develops future culinary innovators.

“And that is why are our study programmes are exceptional. Our students leave here with creativity and with curiosity. We are extremely proud and passionate about what we’re doing.” 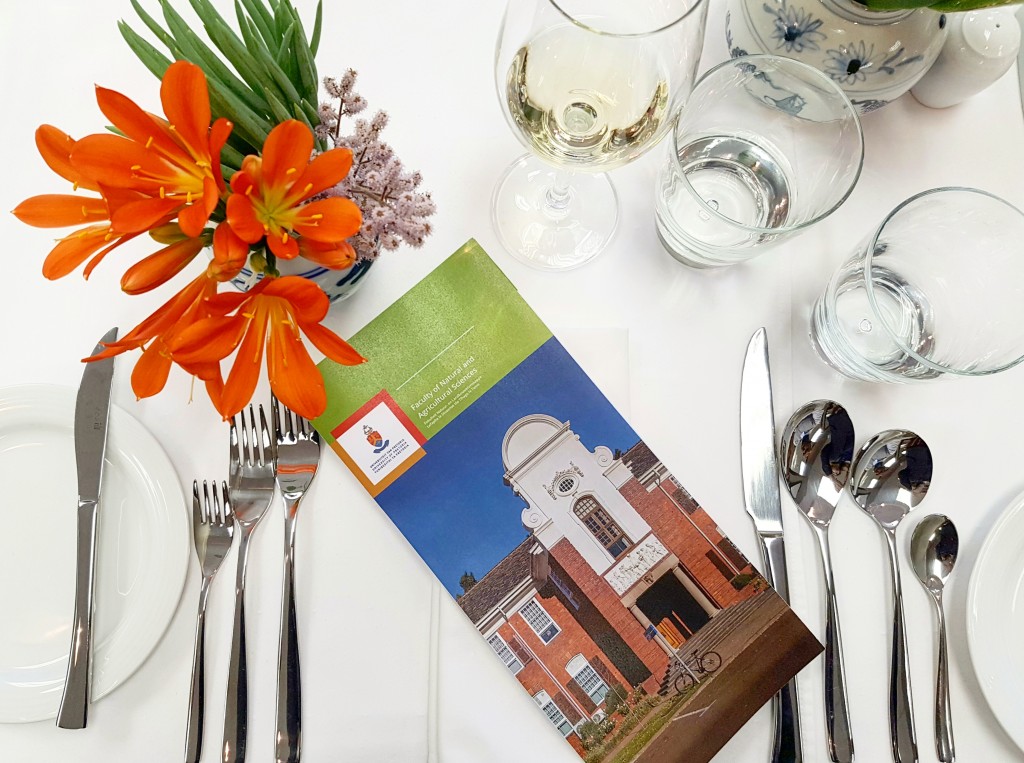 Pan African Cuisine at Epicure in Sandton: A Review

The Short Of It: Perron

Where is your next endless horison going to be?

Been a bit of a travel dry spell but soon, we'll b

Just a view I am missing today.

When you actually make it out the house once in a

I'm such a birding geek now. I love it. It gives m

“I want to see mountains again..."

‘The Road goes ever on and on down from the door

Positivity....oh how I have battled with this one.

This photo perfectly sums up the kind of prepper a

Ruffle my feathers! It's almost time for our trip