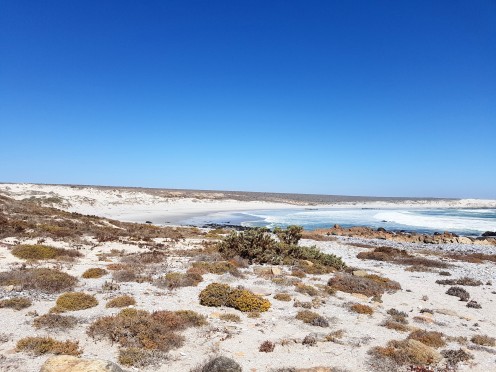 #JFWLovesTravel, The Long Of It Travel, Travel
No Comments

It’s safe to say that before we headed out for our second epic road trip (December 2017), I had some romantic notions in my head about camping on the beach. To assuage your fears, quite a bit of it was spot on. However, beach camping, especially in the no-frills coastal section of Namaqua National Park, does require some preparation and understanding. 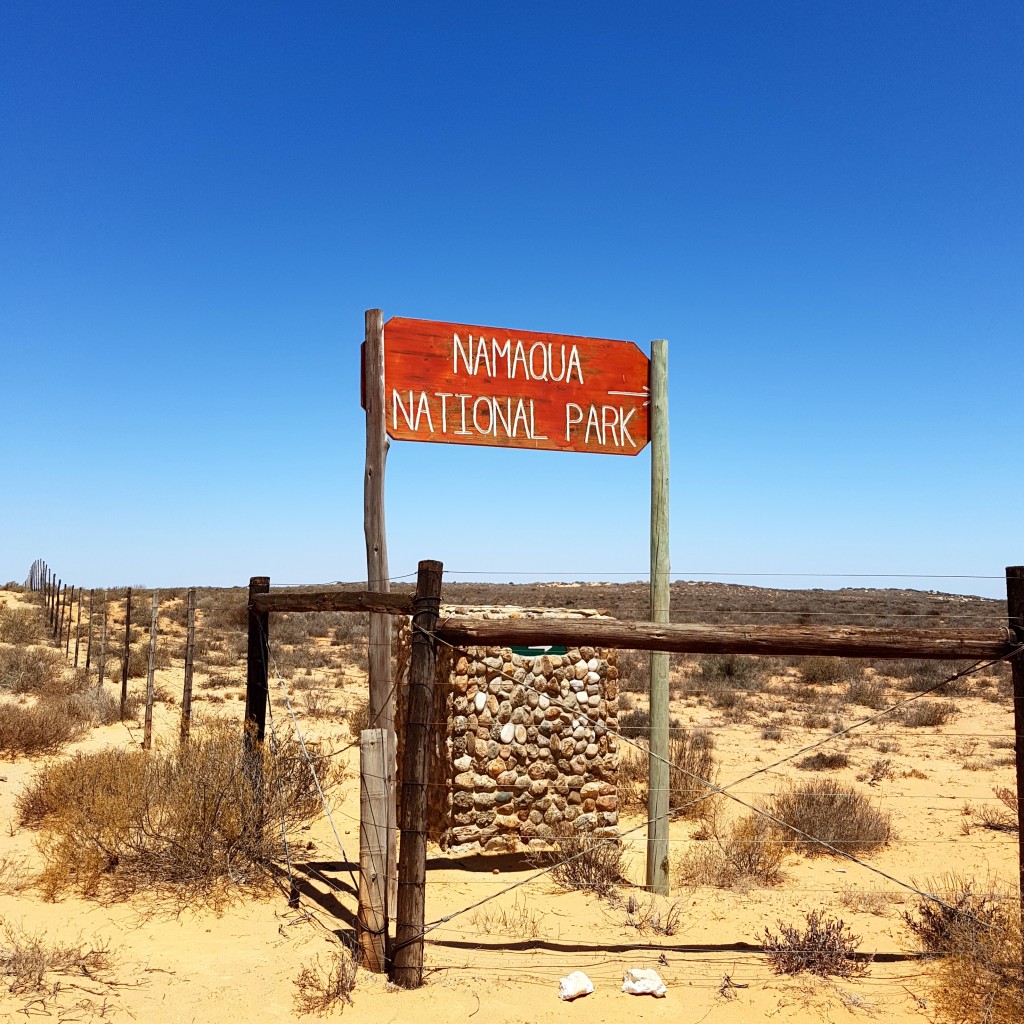 At the time we set out on our second epic overland road trip, we were still of the opinion that the Ossemwa (a 2009 Nissan Grand Livina MPV – basically a station wagon/mommy vehicle) would get us everywhere. We were not wrong, but we were also not quite right (see my article on our adventures in the Tankwa National Park). We had no idea that so much of the Northern and Western Cape was still absolutely strewn with gravel roads. And it taught us another lesson – that we should have appreciated the Namibian gravel roads a helluva lot more than we did. 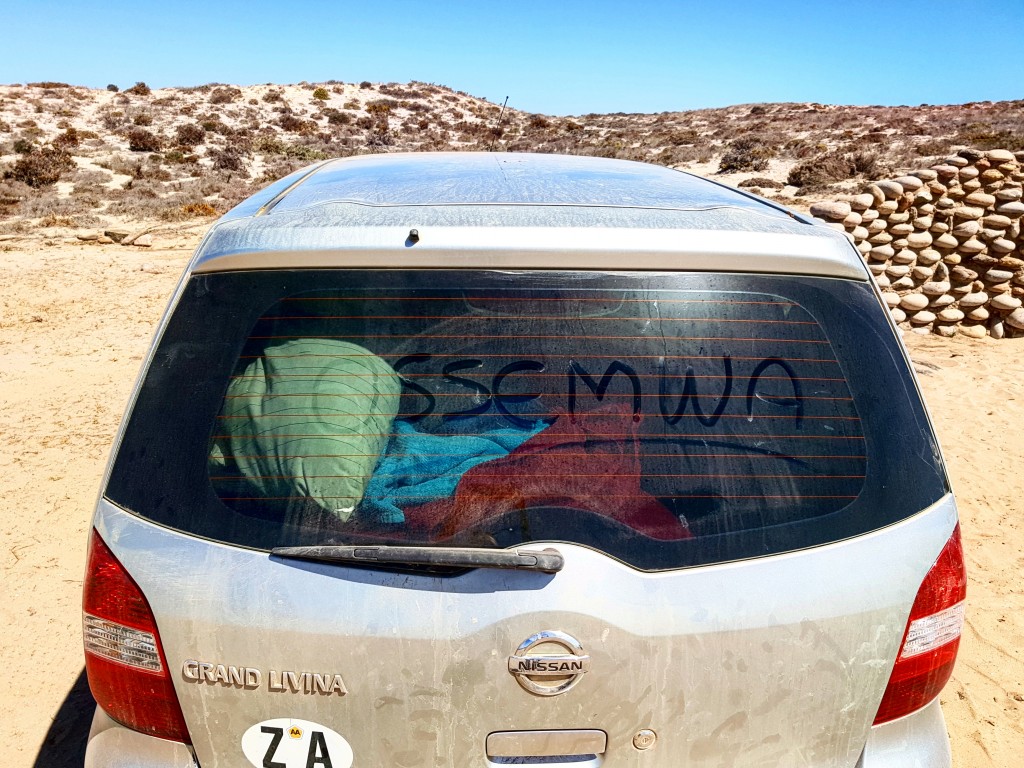 Another interesting thing we learned as we went was that much of the northern West Coast is inaccessible to the average citizen, as the roads are closed for diamond mining. My original plan of driving south all along the coast was slightly scuppered due to this fact. However, we did get to see much of the sea, albeit somewhat in the distance in most cases. 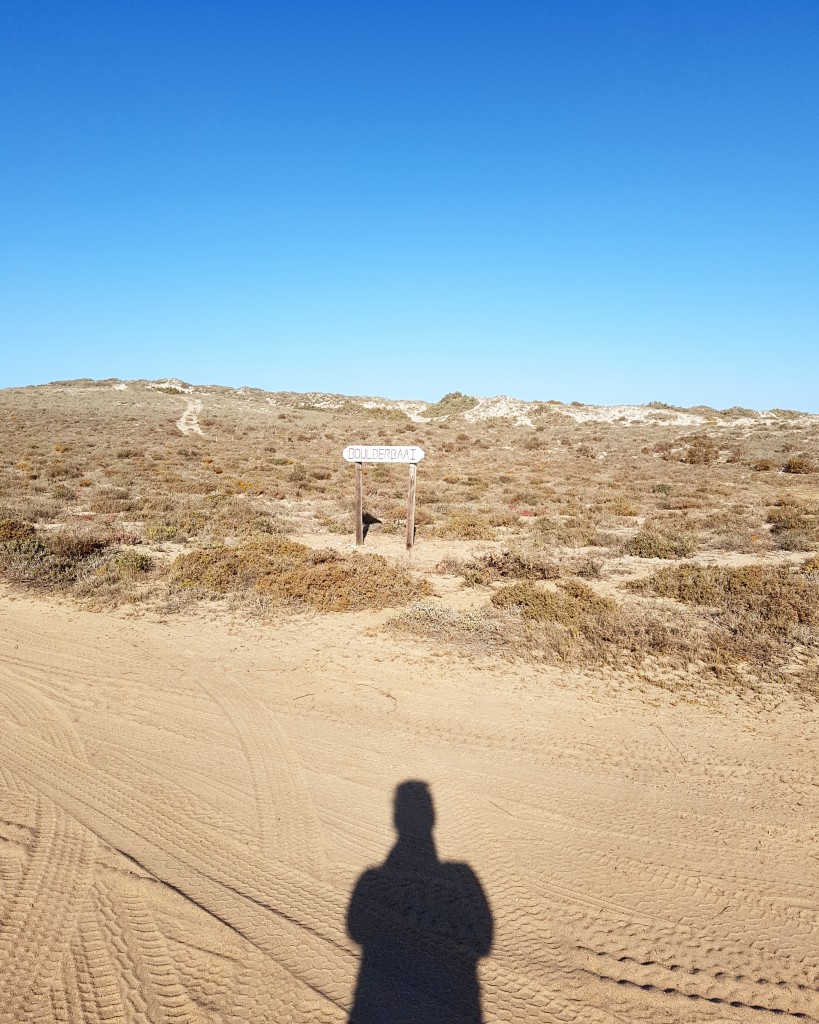 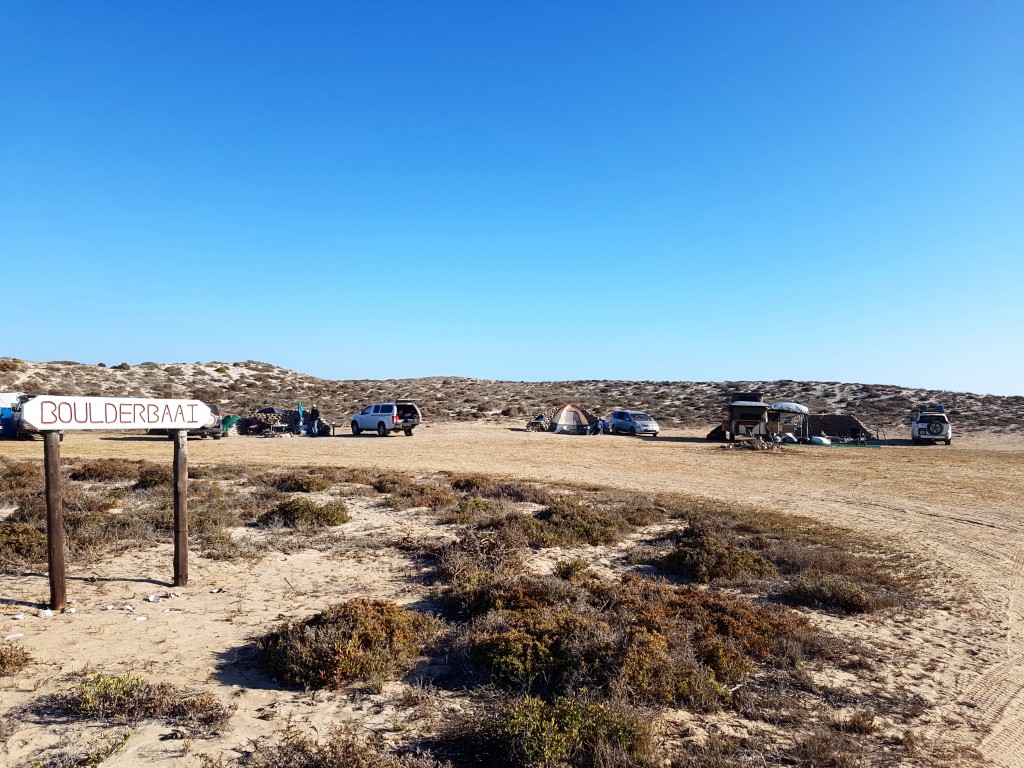 But back to the topic at hand. We were driving from the north western most point of South Africa, down along the West Coast, and we would be stopping over in the SANParks Namaqua National Park coastal section. Our campsite was called Boulder Baai (Bay). It was also the very first time we would be camping completely “off the grid”. The coastal camp sites of Namaqua National Park feature “enviro loos” (a fancy word for long-drops) and in some cases, such as ours, a little windbreak wall, but nothing much else. No electricity, no running water, no ablutions other than the enviro loo. We’d faced some challenges camping all over by this time and we reckoned it would be doable. All we needed to do was ensure we had lots of water along with our standard supplies. We usually travel in such a way that we are entirely self-sufficient but large quantities of water would be new for us. 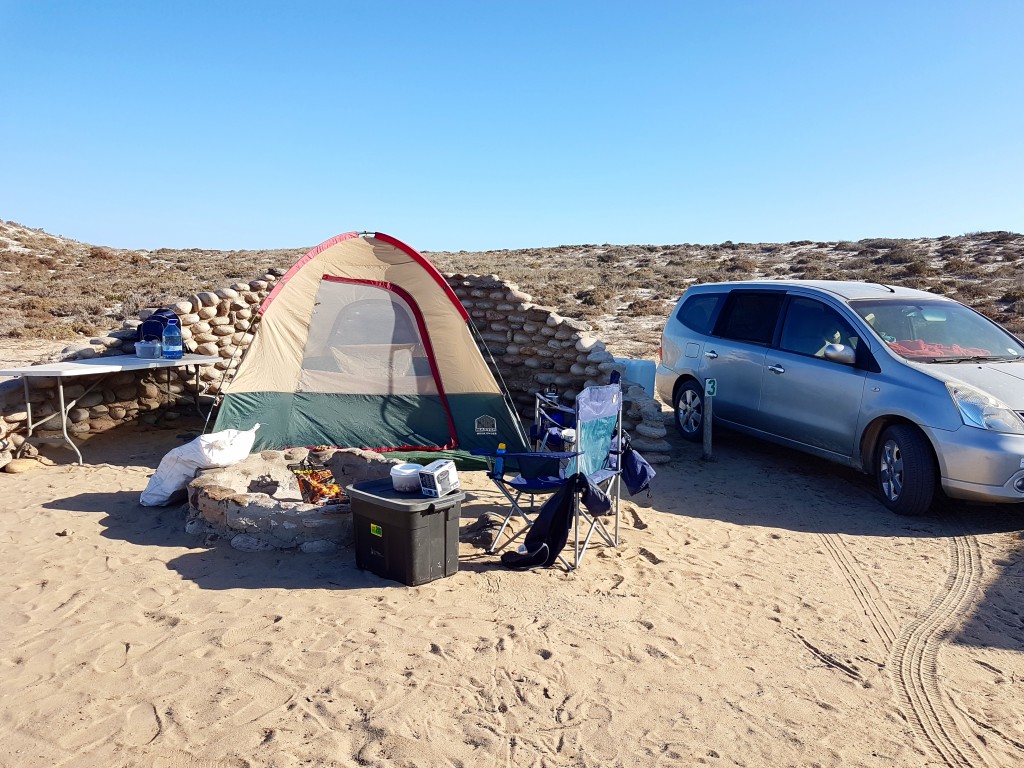 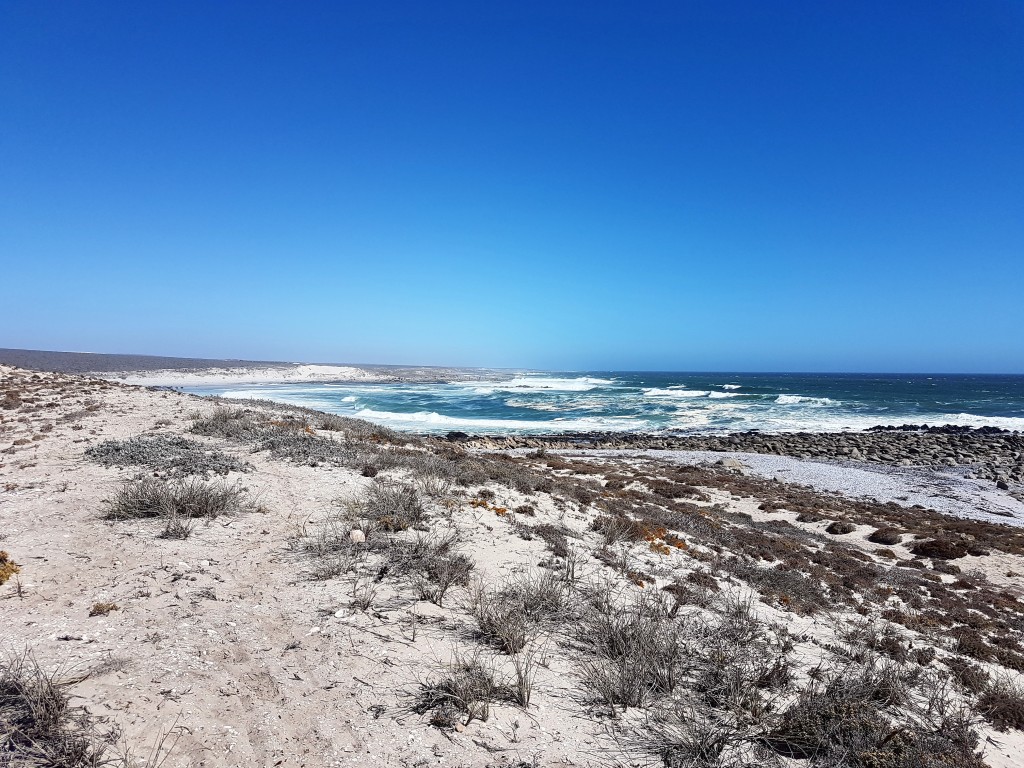 Our trip to the Hondeklip Bay road gate was a 120 km dusty trip from Kleinsee. We actually stayed closer to our destination at a pretty great spot called Die Houthoop, but had the good sense to return to Kleinsee to get some fuel. The Namaqua Park has no stores and absolutely no fuel anywhere. As the site says, for the coastal section especially, you have to bring absolutely everything you require to be self-sufficient, including fire wood! 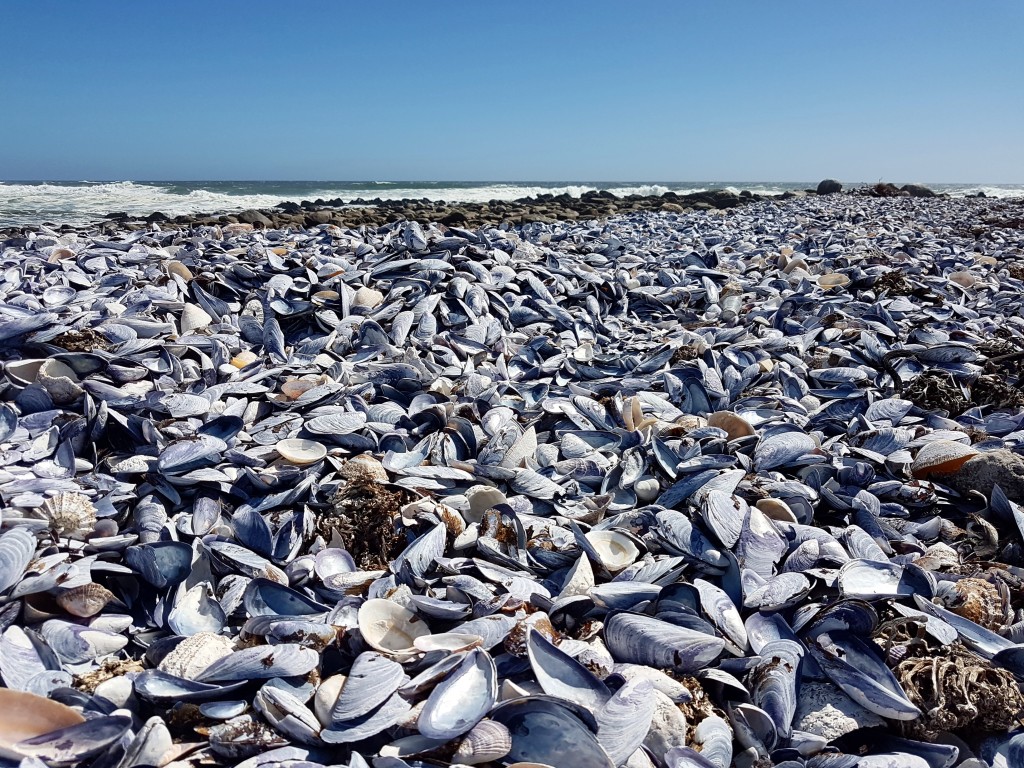 Truthfully, quite a bit of our early travel adventures kind of ran as follows: we made sure we were informed of the details but did not quite appreciate what exactly those details entailed. Experience is the best teacher and now we have a fuller grasp of what exactly it means when you’re told (for example) no shower, no water, deep sandy roads, river crossings, and how fortunate we’ve been when, in the past, we’ve sort of blundered through potentially hazardous situations being fairly ill-equipped for them. We must have some sort of lucky star, though, because in almost all cases when things went a little “funny”, it could have turned out a fair deal worse than it ever did. I cannot even in the slightest claim that this is because we were so well prepared or such experienced travellers at the time. 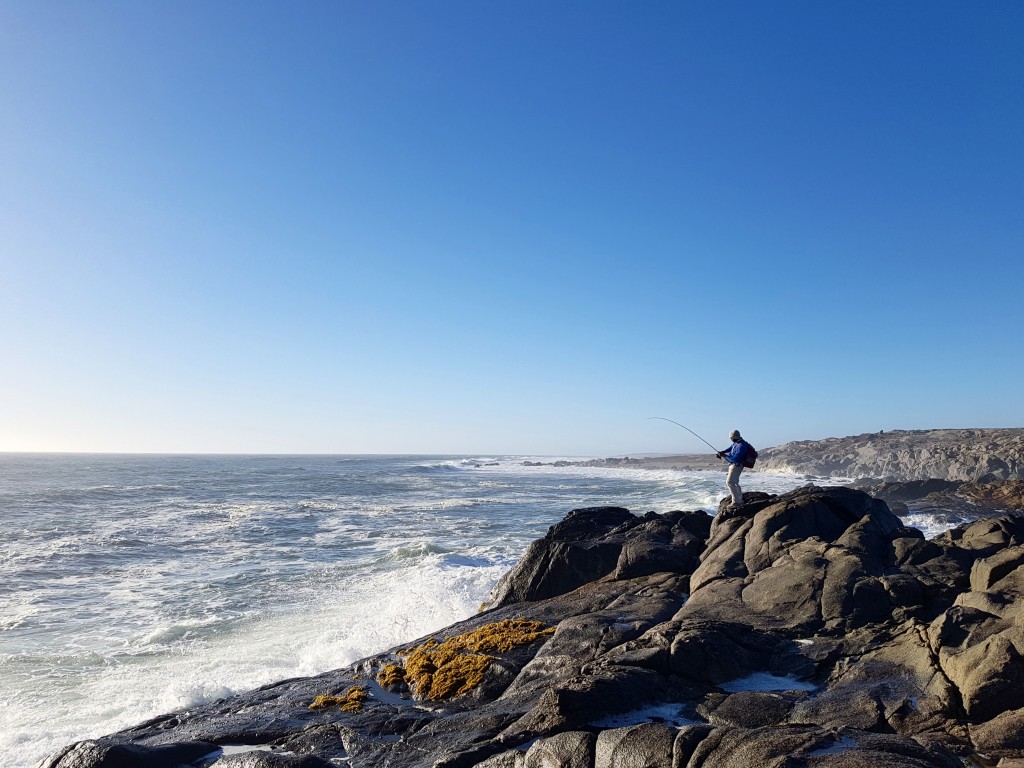 I’d like to think that now we are but I reckon we’ll find ourselves learning quite a bit more as time goes by. Just a few short conversations with one friend who often does no-frills, unfenced, always-travel-in-two-vehicles-to-save-one-another overlanding trips, and I can appreciate that we still have some adventures to experience, and some lessons to learn. 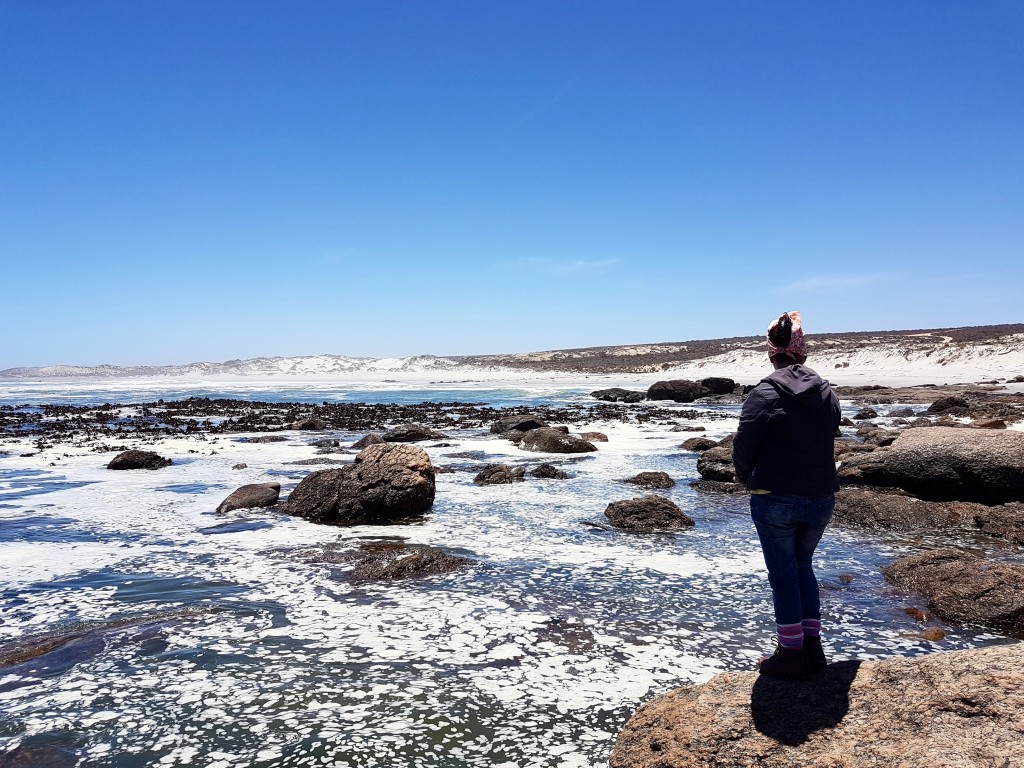 Despite all of the above, we left Boulder Bay being absolutely madly in love with the place. The kind of “getting away from it all” that you don’t often find is exactly what we experienced in Boulder Bay. 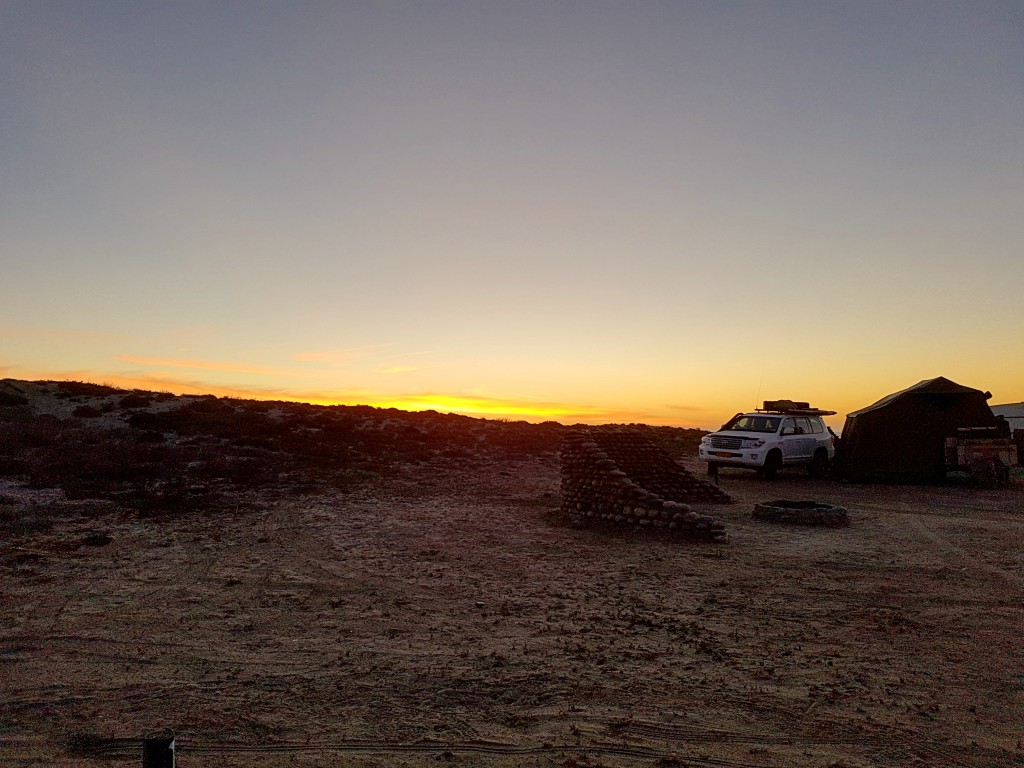 After some seriously sandy patches where we weren’t quite sure we’d keep moving forward, we basically bottomed our way out to the end of the final bit of road to arrive at our beach camp. With a total of six camp sites, I can assure you that we were the only vehicle there that was not a full 4×4, even when one group left and a new family arrived at this or that site. And we got some rather bemused looks from the campers who had already set up when we bounced (i.e.  scraped) in. These guys came prepared. Our one neighbour had one of those big fancy trailers with ALL the bonus features, including their own shower. They even had bean bags! 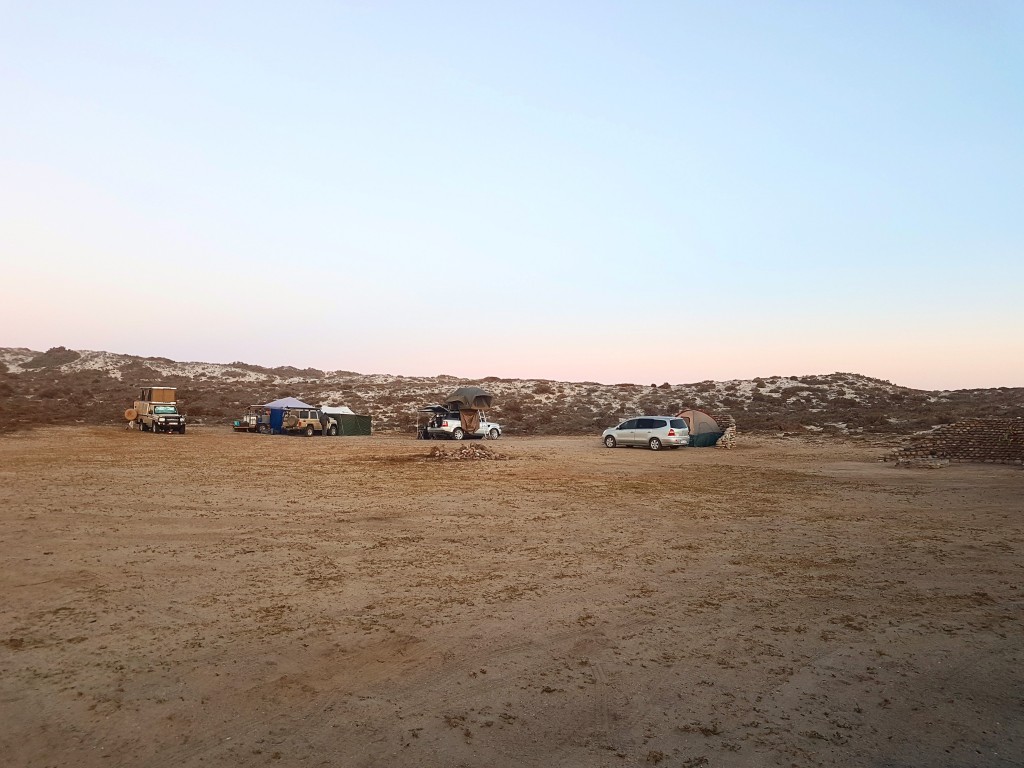 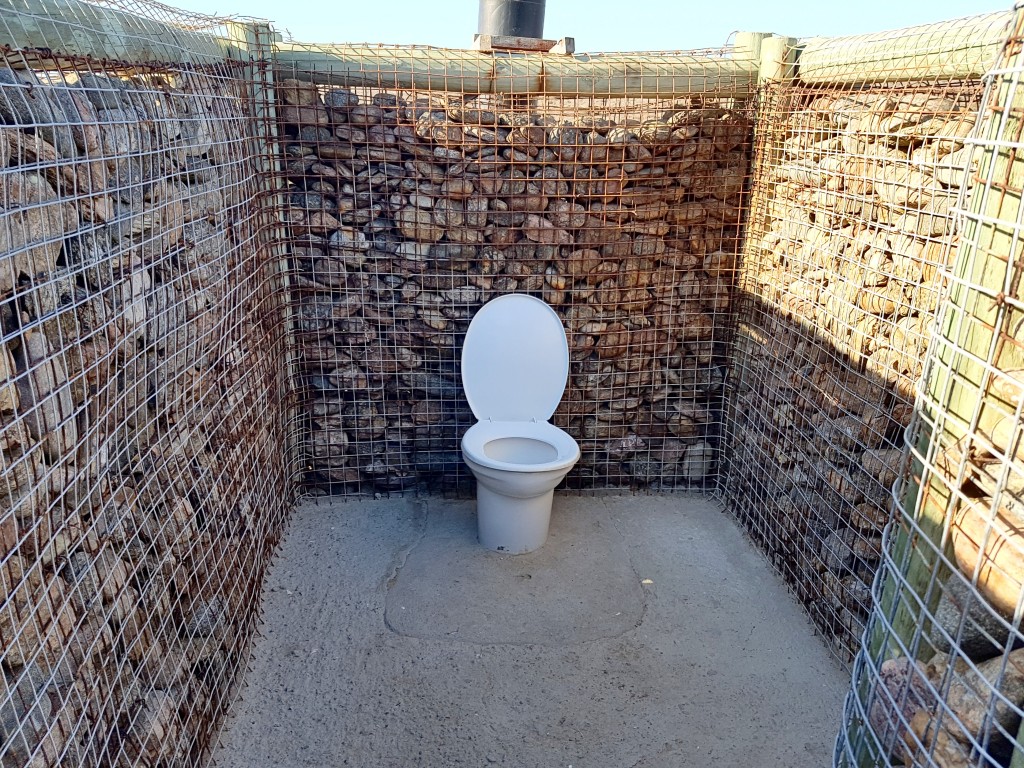 At another camp site, we discovered a family who had been staying there for going on three weeks already, by the time we arrived. They were staying in a caravan (I’d venture it had a shower). It seemed to me that three weeks would require a LOT of packing, preparation and water, but they told us that they just get in the bakkie every couple of days and drive the very slow and long 70km dusty sand roads to the nearest town for supplies. I’m not going to lie. I spent much of this conversation with my mouth hanging open. Three weeks! Travelling for supplies! A regular trip to Garies! Three weeks!! 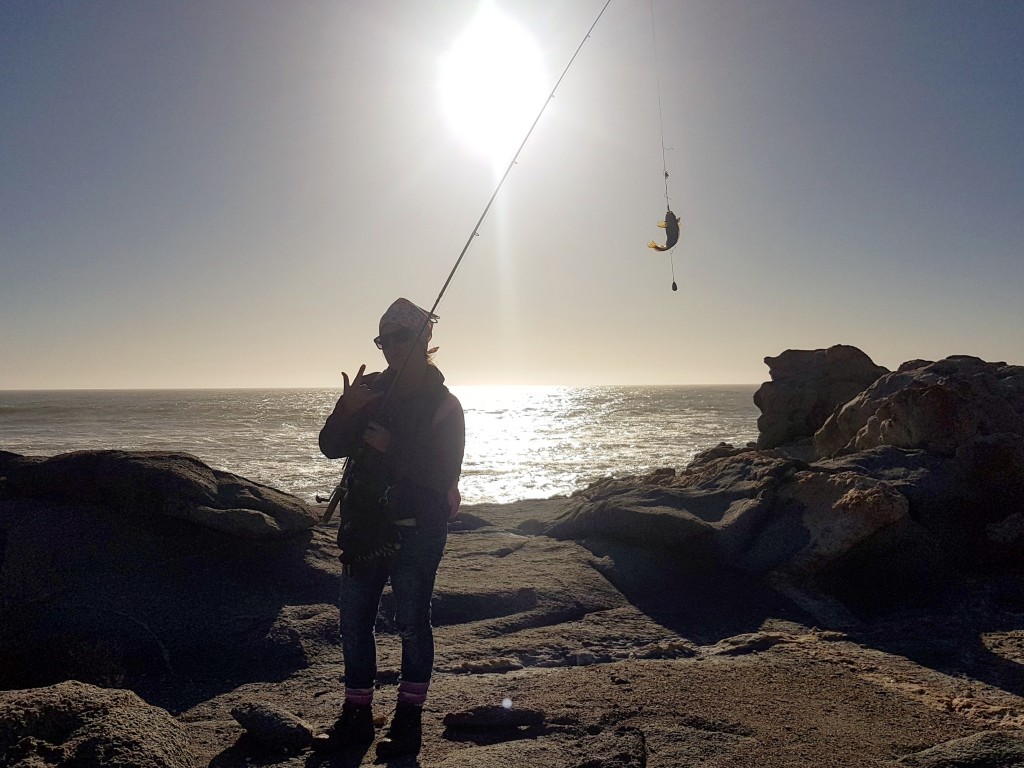 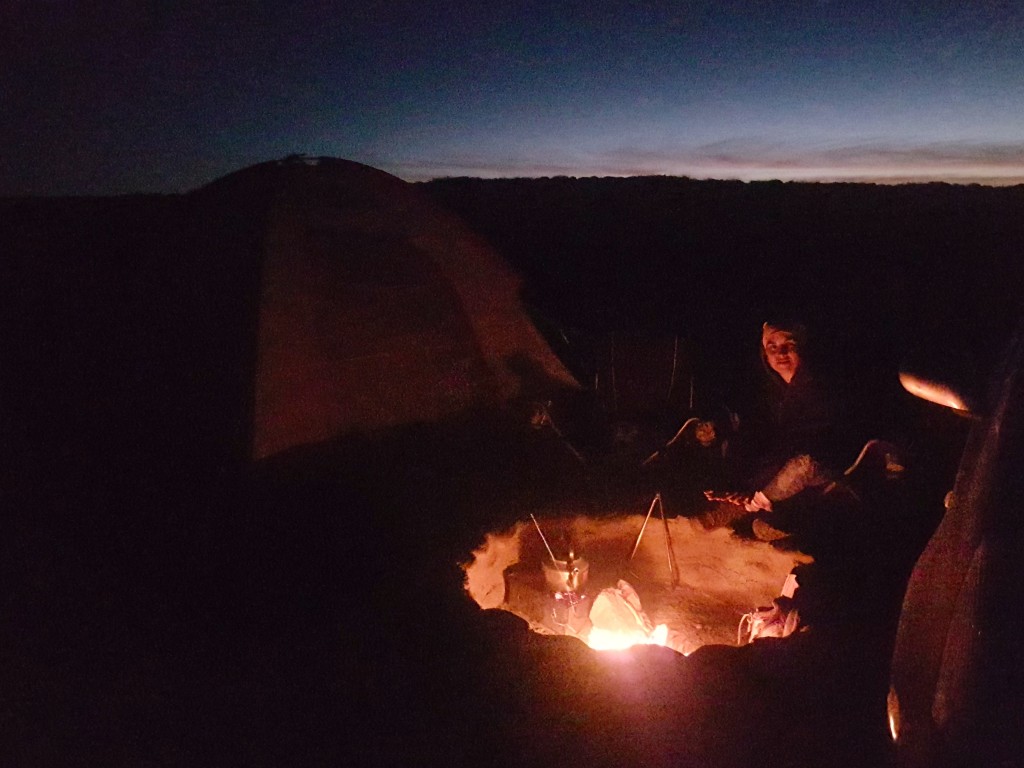 Despite absolutely freezing when the wind came up fiercely the first night, we could not help but appreciate the utter solitude and magnificence around us. And come morning, there is no hiding from the sun, unless you have an awning, so when the sun is up, so are you! 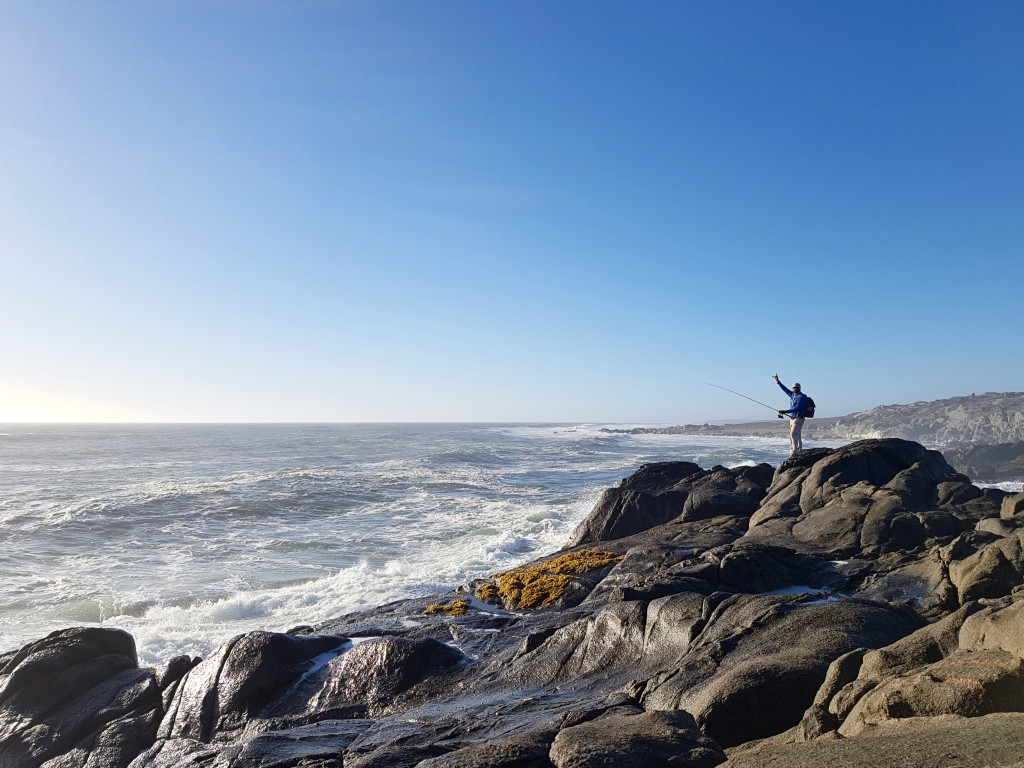 If “getting away from it all” is your thing, then we highly recommend staying at one of the Namaqua coastal section’s beach camps. We spent the entire day on the beach and rocks, fishing and exploring, walking quite a distance, and never during the entire six or seven hours we were out there, did we see another soul. That was the case even though there were four other families camping alongside us. 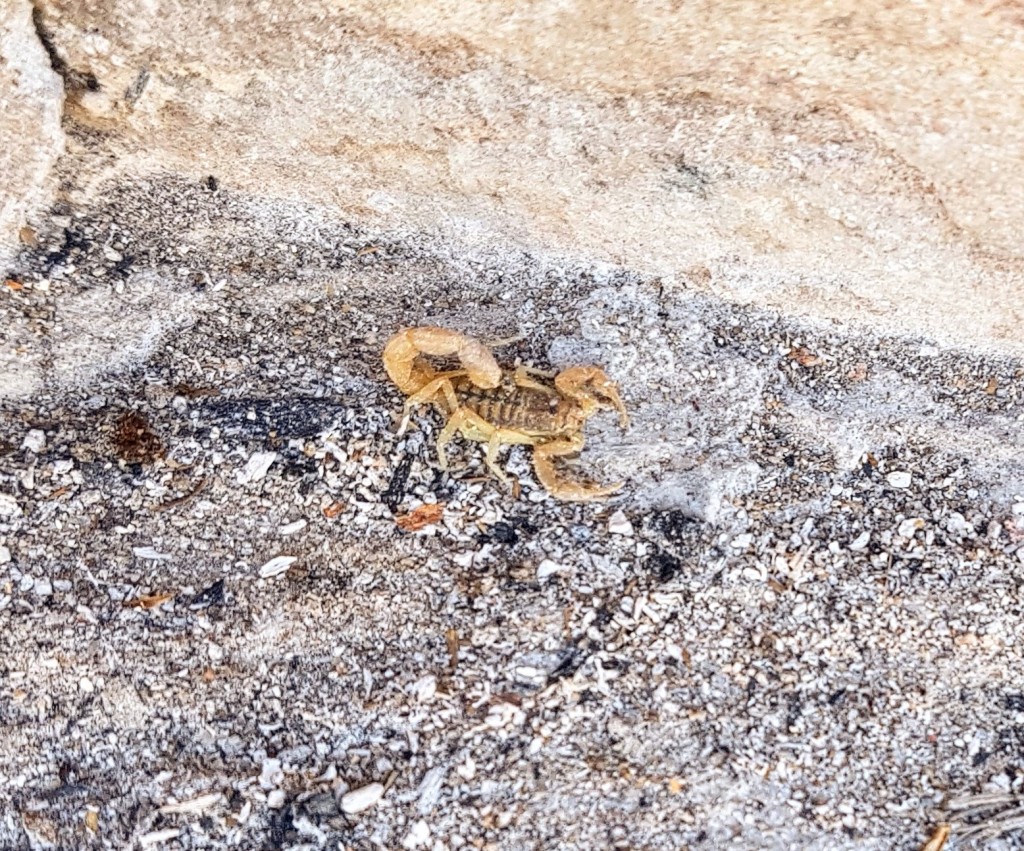 We are very much the amateur ocean fishing types, and do not have the right equipment, so we spent most of our fishing time clambering up and down the rocks (they don’t call it Boulder Bay for nothing) catching some kind of “rock fish” (as one kid called it). Feel free to let us know if you can identify the exact fish species from the photos. 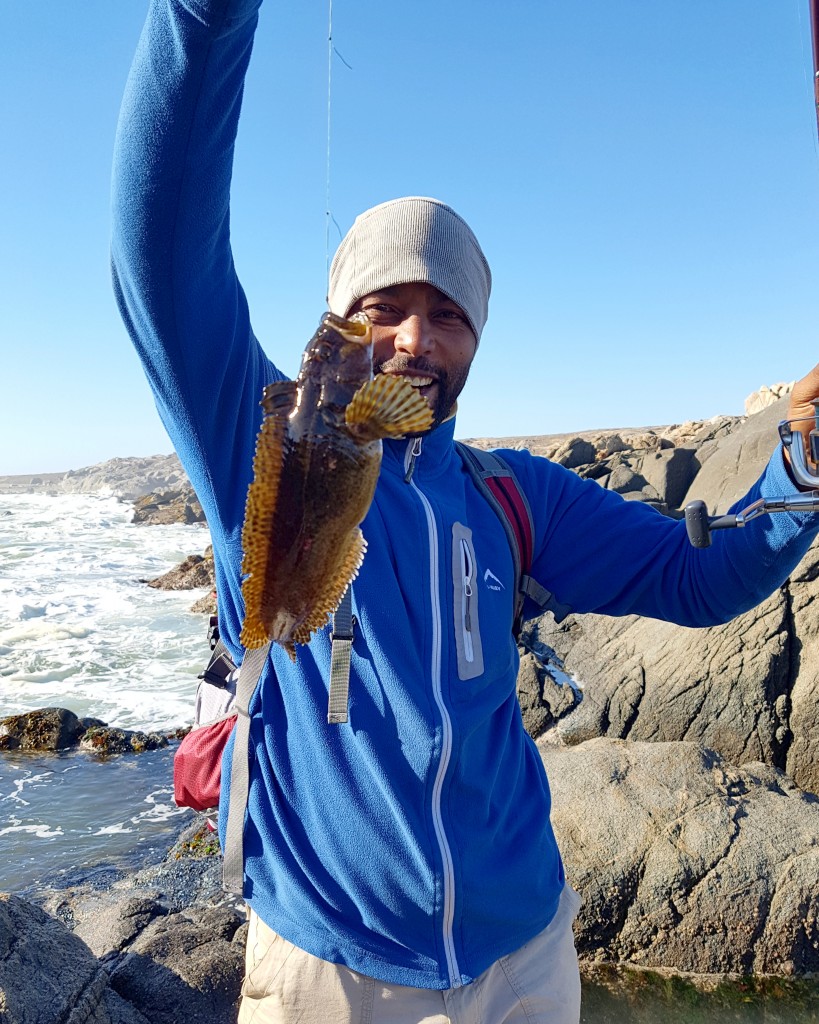 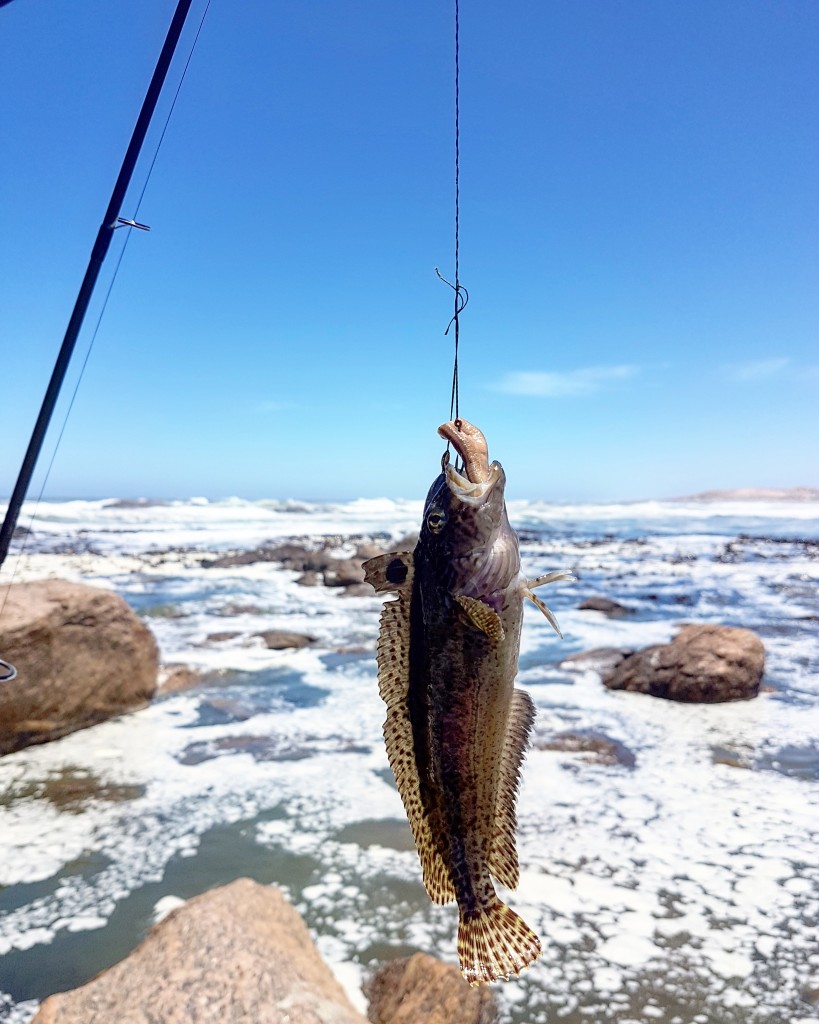 WHY YOU SHOULD VISIT THE NAMAQUA NATIONAL PARK COASTAL SECTION 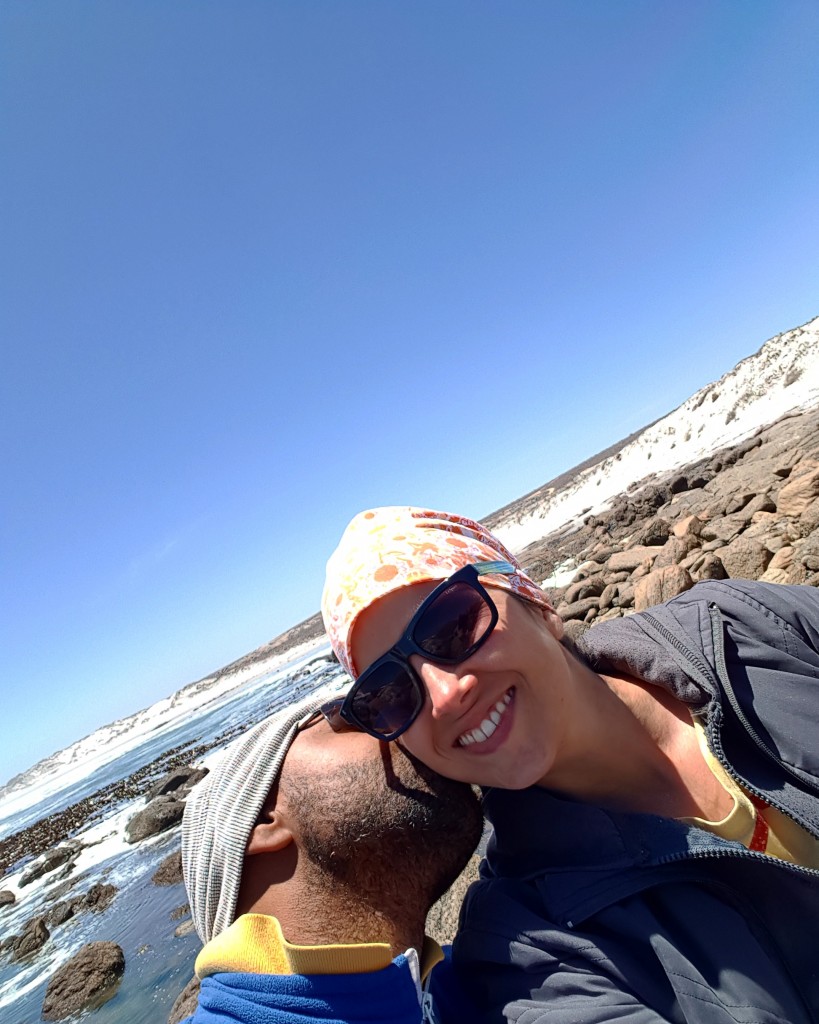 Fishing is currently allowed so if you’re keen, make sure you purchase the necessary permits (try the Springbok post office). Remember to stick within the limitations as specified on your permit. The “kreef” (West Coast Rock Lobster) is already on the red (endangered) list so either leave it out altogether (my suggestion) or do not bring in more than the permit indicates. 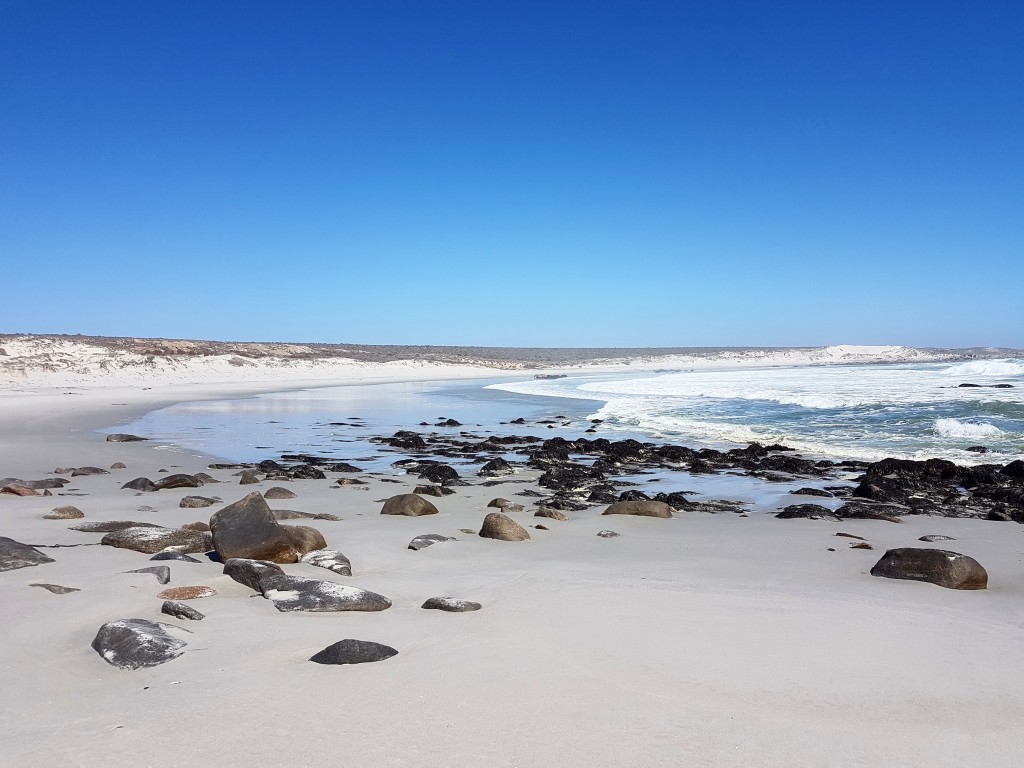 The park staff come almost daily to collect people’s rubbish and see to the enviro loos. This makes a huge impact in terms of your comfort and also means you don’t have to keep your rubbish until you leave the park. 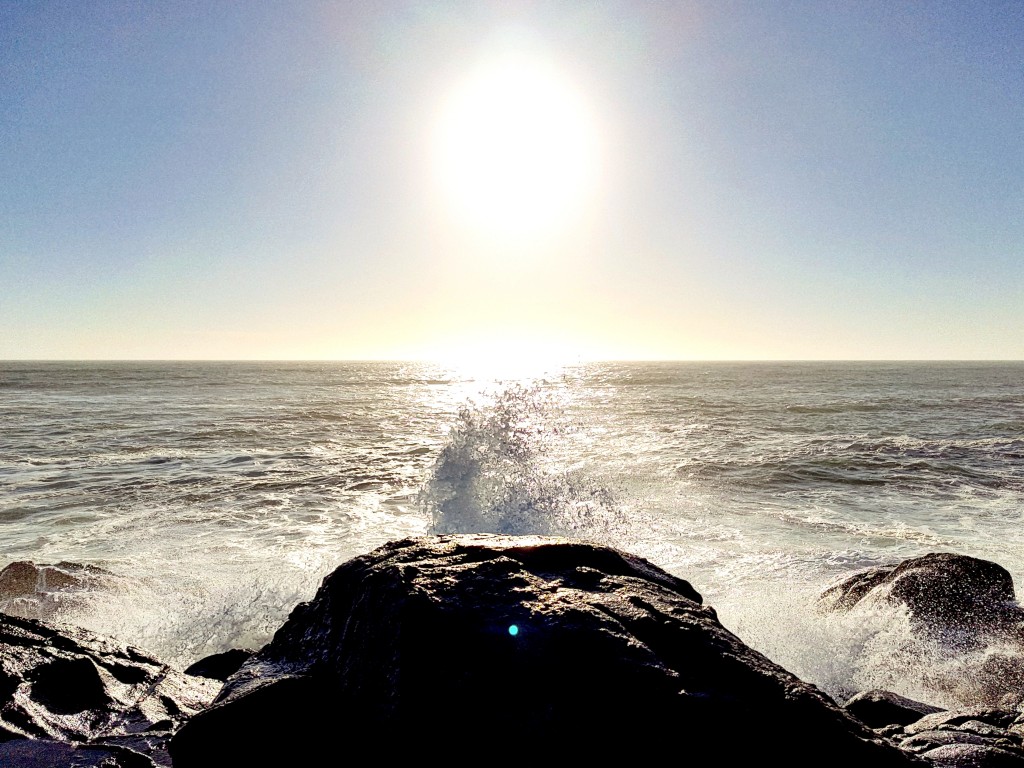 Keep in mind that it is a South African National Park (SANPark) and therefore, conservation fees do apply. The costs are different depending on whether you’re a South African citizen or permanent resident, a SADC citizen or from countries not listed, so check those details when booking. 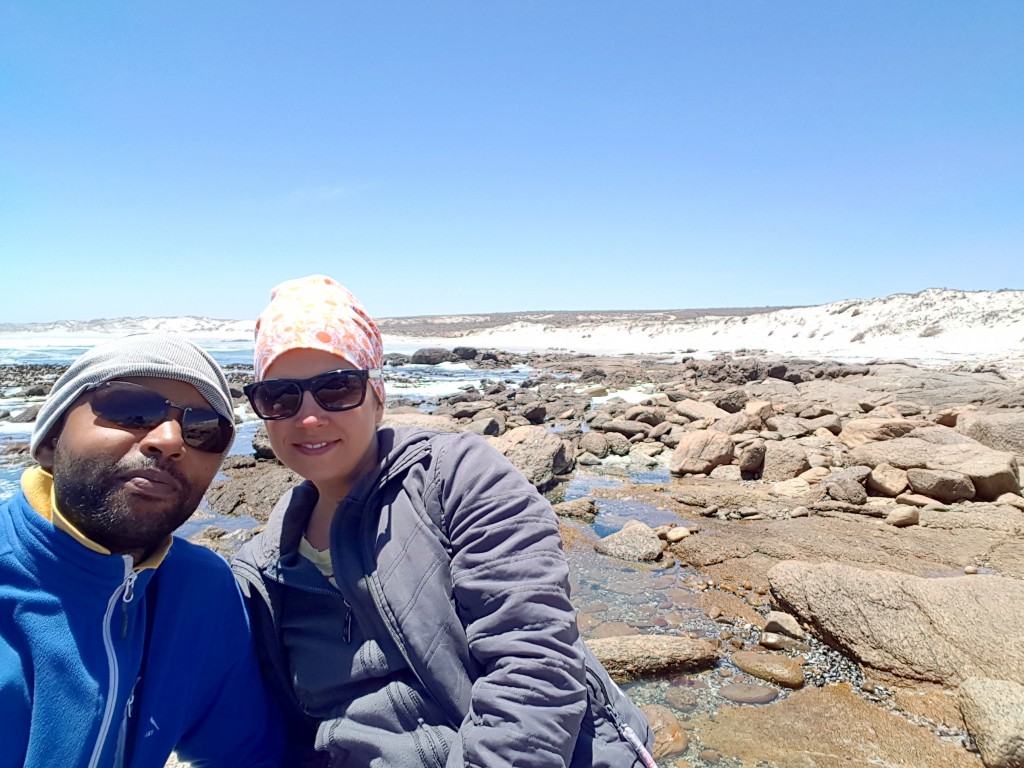 Be sure to give yourself enough travel time when heading to the park as it’ll be slow going from many directions, and once inside the park, the roads are basically single lanes with deep sand and the usual speed limitations for SANParks. Also, rather than storming to your camp site, take a leisurely drive and enjoy where you are and what can be seen. You’ll definitely spot some birds of prey, as well as small- and medium-sized herbivores, if you keep your eyes peeled. 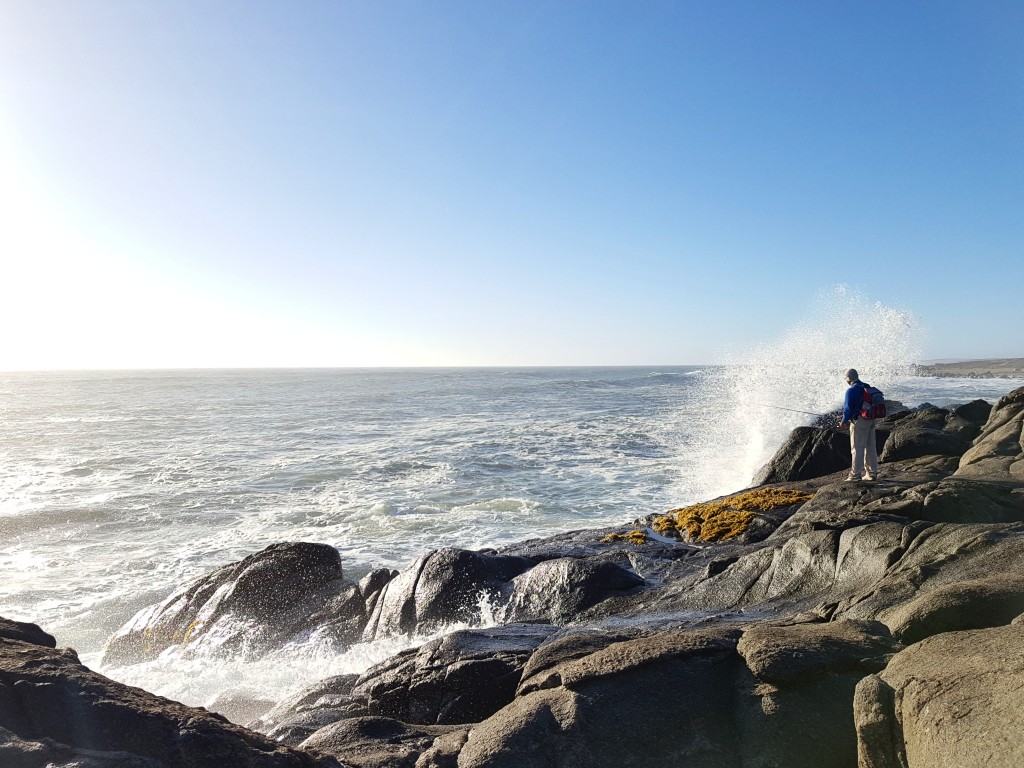 In conclusion, it’s definitely worth a visit. It’s a loooooooong way from Gauteng so make a road trip out of getting there, and take a different route (more road tripping!) coming back. There is so much to see and experience in the Northern Cape so if this is an area you haven’t explored before, use this as the excuse you need to jump start the planning, and travel to the Namaqua National Park via this beautiful yet less “busy” province.
Need even more reasons to visit Namaqua Coastal campsites? Take a look at my new feature: 7 Reasons Why … 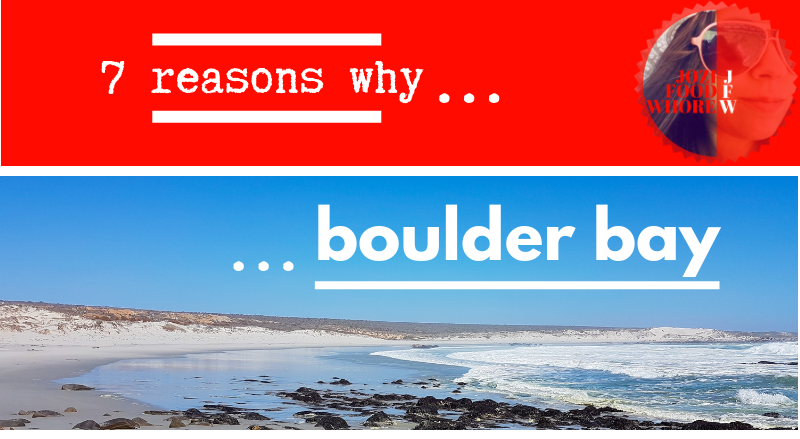