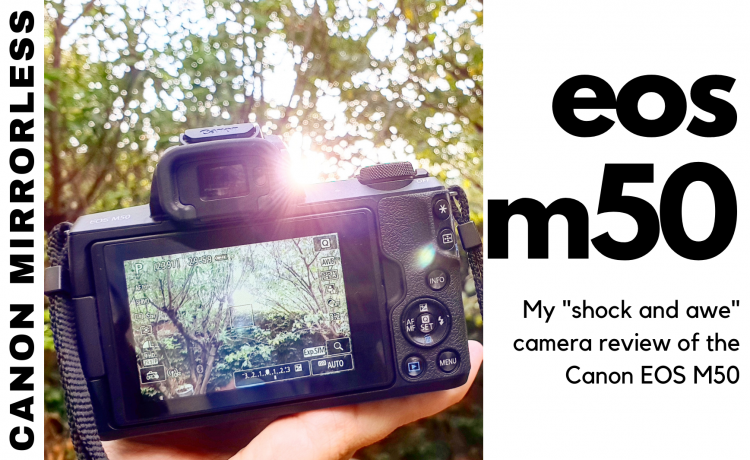 My “shock and awe” camera review of the Canon EOS M50

When Travel Gigolo first told me about his experience with the Canon EOS M50 (he got to play with it at a Canon mirrorless camera launch event), I was like “cool, sounds nice”. He went on to describe how small this camera was and I was saying “mmm, okay”. The day it arrived and I unboxed it, I actually said “what?!”. Even forewarned, I was shocked at how small it actually was. I picked up this compact camera and stared at it. Why had he insisted we try and get one of these for a camera review feature?? I didn’t understand it. But here it was. I had to wait until after work before I could really start playing, but I kept looking at it, wondering how on earth such a small thing would work for us in the field.

I’m sitting here now some weeks later, and I am freakin’ awestruck by what we achieved with the M50. Wow. Wow. Wow. WOW! This camera is it for me right now. A pint-sized package of absolute dynamite. I must have it! Small, compact, extremely functional, and best of all … affordable! Yes, that’s right. Under R10k for this beautiful piece of magic. Here’s why you absolutely must consider the Canon EOS M50 mirrorless camera.

Except it’s the other way around with cameras. The way the world is changing, smaller is better. I saw one camera review stating you can shove it in your jacket pocket. Yes, you can. I kid you not. Just imagine a small camera bag carrying your compact M50 plus your extra lens. No heavy lifting, tiring lugging, neck ache, or missions with a whole case of lenses. And when you think of the landscape in South Africa, that’s also a serious plus point in terms of safety. You’re not walking around flashing a massive piece of serious-looking equipment. And when not in use, it can easily be tucked out of sight.

I won’t lie to you. Getting that connection set up might be one of the biggest pains in the arse, back-and-forth, “why can’t I make this work?” parts of an otherwise streamlined user interface you’ll have to deal with. Luckily, it only needs to be done once, and then you have the benefit of getting to post photos to your social media profiles right then and there, on the go. The Canon app is not my favourite thing in the world and I think it can definitely do with some improvements, but you can’t beat that functionality of camera-to-phone immediacy.

This has to be, by far, the biggest selling point of this camera review. It’s a cracker of a camera, with a wide range of functions and abilities, and you can get one with kit lens at less than R10k. Woah, guys! If you wanted a decent DSLR, you’d be looking at minimum R20k and that’s with zero lens. This is nothing to sneeze at for the average Jo Blow who is starting a vlog, or getting into photography, or looking to up an existing cell camera Instagram game. The price point has also absolutely sold me. SOLD! I am simply waiting for my latest rash spending decisions to get behind me, and I’m getting it. 100%.

When I first fiddled with the touch screen, I was rolling my eyes and getting annoyed and and and. It seemed a big problem to me, being used to other Canons that don’t have this feature. By the end of the first week, I couldn’t even remember where else to change the settings, I was using the touch screen so much. One of the most incredible highlights for me was the ability to use the touch screen to change settings during the filming of a clip! Amping the exposure when you realise it’s too dark, or the subject moves into shade … just a few soft touches on the screen and it’s done. When it comes to animal sightings, having to stop and restart a clip after changing settings might mean missing the entire shot. Thing of the past!

I don’t know who’s borrowing from who but I found this camera to deliver images that had a lot of built-in vibrancy and colours that pop. This is similar to the benefits we find in cellphone photography and clips. That dull flatness is gone. Now you can immediately use a clip that you just shot, and it doesn’t need to be filtered to really grab you. It’s already there. The images are also just incredible. We worked with an 18-150mm lens the entire time but found that we could shoot a subject that was a little too far away, and still get an incredible cropped image out of it. But incredible! Clear, defined, with great focus and amazing colour.

If you’re brand spanking new to photography, and you picked up this camera, it would guide you through all you need to know. It has two user interfaces to choose from. One is a wonderfully simple, basic interface that conveys the nitty gritty with minimal text or complications; tips and tricks without the tech speak. It’s helluva useful for someone getting to grips with a new camera too. And if you’re way beyond that, you can simply change the settings to the Canon user interface you know and love. Despite that, we never changed back to the original interface setting. It was handy, quick & easy, and a time-saver.

This is the first time I’ve relied heavily on this function on a camera. These were great shortcuts to getting the shots exactly as needed. When the lens couldn’t quite give me the shallow depth of field I wanted, the Macro scene setting worked like a bomb, even when I wasn’t shooting subjects really close-up. The Landscape setting was great for various shots and clips. The hand-held Night scene functionality works wonders in cityscape conditions. We even tried the Sports scene element for the moving animals.

I had a few people mention that it wasn’t great for low-light photography and filming. Perhaps I’m not used to what they are, or perhaps the issue is really indoor lighting, but we actually found it to be quite surprisingly useful in outdoor low-light scenarios. Where all our other cameras had already given up the ghost half an hour ago, we were still getting clear shots of animals in seriously bad lighting/late in the day. We even took some clips and images of a pride of lions well after sunset, and though these set of pics in particular are not crystal clear, they are well beyond what we would have normally been able to achieve. Those images and clips are entirely usable whereas we would have had to lose out on that footage previously. And I got a pretty epic pic of the full moon on a tripod.

Despite all of the above, we still did have a few issues that are worth mentioning.

For me, the camera size was perfect. It fits in my hands well, and I can easily handle and maneuver around the settings and buttons. For Travel Gigolo, the small size was bothersome in his hands. He kept accidentally pressing the touch screen or the buttons with the pad of his hand, changing settings and fudging the shot. The focus point also jumped to the wrong position often.

The record button is absolutely infuriating. A very slight depression on the surface of the camera, the position is awkward and you have to really press it for things to happen. We lost many shots while getting to grips with the record button – both because of its location and because it just wouldn’t be pressed. Even if you thought you had started recording, you were often wrong. Hopefully that can improve with usage and time. But that little button resulted in many grunts of frustration, lemme tell you.

Because the camera is so compact, and everything is so close together, you find your face gets squashed onto the touch screen quite a bit when looking through the viewfinder, leaving a nice nose print on the screen each time. This requires some adjusting to your usual viewfinder approach.

The camera does seem to struggle focusing on black subjects/spots. I had this gorgeous sunbird sit around in a bush and then a tree for absolute ages (entirely unheard of) but we simply could not get the camera to focus on what it must have deemed a “negative space” for all that time. That was a shame, ’cause that was a beautiful little bird.

Basically, it’s a resounding “take my money” YES from me. After using this tiny bit of dynamite, I seriously question whether I’ll ever get won over by a big, bulky, heavy DSLR again. Seriously.

Many  thanks to Canon South Africa for the loan of the Canon EOS M50 mirrorless camera, a pretty damn incredible discovery.

On Holiday with Canon