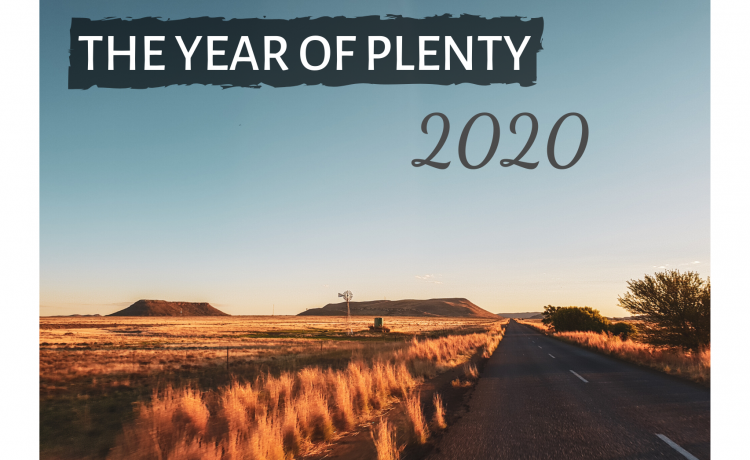 The Year of Plenty

If we’re being honest (let’s), I pretty much don’t do January. And that’s why you’re getting a “2020, the year of plenty” post in the first week of February. Happy new year, I guess! My blogging year starts now.

I’ve been going through a lot, trying to figure out the “what now?” of the blog. What started as something that was all about my food obsession has morphed into a seemingly abrupt Shot Left to travel. It may seem odd to someone looking in from the outside, but it isn’t.

When I first started posting reviews on Zomato, I was in fact firmly on my way to losing everything. After owning and running a successful business (two, actually) for nearly a decade, technology changed and suddenly my type of business was shutting doors everywhere. Up until that point, I was living the dream: I had bought a house, I had bought a new car, I adopted two crazy pooches, I had travelled overseas a number of times, and I had the freedom to dine out whenever I wanted. And I often did the dining out with large groups of people, because as a hobby, I ran a social group that did all kinds of fun things including scouring Gauteng for the best restaurants.

So I had quite a few restaurants to review by the time I came across Zomato. At the same time, it was all ending – the dream, that is. For the next 7 or 8 years, I spent an extreme amount of effort trying to dodge actually getting declared bankrupt, as well as chipping away at a mountain of debt. The only things that are still with me today from that previous life are my dogs, half of my books, and my car, the Ossemwa. Things were sold, taken, closed, let go of, or downsized. So it was that I started getting invited to Zomato dinners without being able to get there (no funds for fuel). But I knew I must, somehow, get there. It was a lifeline I refused to let go of. So I begged for lifts, or willing friends lent me petrol money. And I made it. Sitting there, I couldn’t even afford to tip the waiter. I listened to the people around me discussing all the trips they had planned or just been on, and where they would vacay for Easter or December.

It pained me to realise I wouldn’t be going on any holiday of any sort for a very long time. I had at that point worked out how long it would take me to pay off my debt, and it came to 17 years and some months. In the end, I was fortunate enough to sell my house, situated in an area where every second house was for sale, and as such pay off all my debt.  In early 2018, I used almost all that was left from the sale to finally become 100% debt free. It felt like the achievement of a lifetime.

Though I can hardly say I’m flush these days, suddenly travel, at least regionally, became possible if I cinched real hard and spent only what was absolutely necessary. And that’s how I found myself planning our first ever epic road trip. I now worked in an industry that shut for December, and allowed for three weeks of complete and utter freedom. Three weeks is quite a lot of time to go a fair distance and see many things. But … budgets. I realised that yes, I had major dreams of travelling, but there’s that joke about the bank balance and “going places”, ‘places’ being the garden.

I’m very fortunate to have as my partner in this world a very adventurous man. He used to go by Tall, Dark & Handsome. Lately he goes by Travel Gigolo. When I said “Well, we can totally do a road-trip but can’t afford to stay anywhere. Would you consider camping?”, he said “I’m easy”. And suddenly, we totally could go on a three week road-tripping adventure. He was easy, I was super organised, we were totally going. Camping. And I have to tell you that it kinda changed my life.

And that’s where I find myself today. I’m a camping person. I’m an “outdoors is everything” person. I’m not the “running the hike up Table Mountain” type, but I’m the “Shall we spend the whole day fishing and braai”ing?” sort. I’m all about travel. I’m super into road-trips. And, I will gladly boast, I am the kind of organiser that you *always* want around to take care of your event or travel plans, especially when you’re a “List? What list?” kinda person. That’s also why I’m now an entire Operations department at my day job.

So here I am, unwilling to spend many randelas on my previous passion i.e. food, all so I can save every little bit for travel. But I still eat. Obviously. And the man still keeps me in the cheese I have become accustomed to.

So this is the “new” Jozi Food Whore page. Same same but different. More focus on travel, with some random gadgets (travel-related) thrown in, and occasionally, I still eat. And talk about it. If it’s worthwhile.

And if you’re reading this, you’re in the No Man’s Land of my newest section, the Diary of a Food & Travel Whore. Welcome.

Travel has always been there. The flesh was willing but the cash was not. We’re on a new page now though. It’s called Twenty Plenty. And I like it a lot!

A Life of Isolation

Things We Lost in the Fire